Jim Adema’s Twin-Engine 1972 Thunderjet (story here a few days ago) at 108 mph? While impressive and the engineering was incredible for what they did in a short amount of time it’s not. WAIT!  WHAT?

This is a story of a man, his family, and friends out to break the Guinness World Snowmobile Speed Record, they used a Sno-Jet Thunderjet as the starting point. And for good reason—light and well designed. Then they made it their own. But first, a little about the man behind the effort. 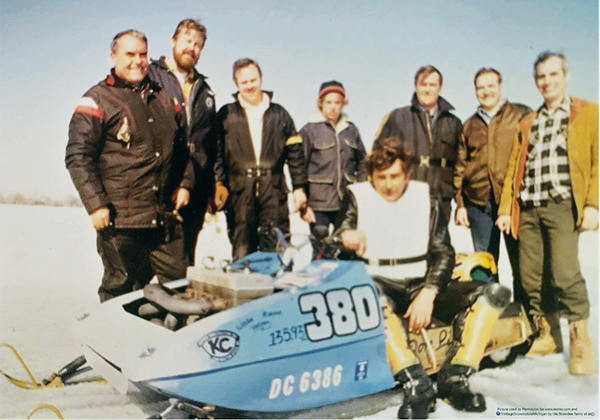 When it comes to Michigan Snowmobile History Detroit Metro’s Lynn Hicks left his mark on not only the state, but the world.  He was on the Massey-Ferguson Detroit based Ski-Whiz Development and Design Team with Thomas Denny and Jack Rose. Lynn worked with the famous Bob Bracy and John Drawe as Chief Field Test Engineer for Leisure Vehicles Incorporated (Raider snowmobiles). Elsewhere, Lynn was often called upon for his business savvy, technical expertise, and he had of wide range of talented family and friends in many different technical aspects of motor and powersports to help out with complex engineering issues.  Also, to top all this off, Lynn owned Hicks Engines and Engineering in Northville—one of the largest Hirth engine and parts distributors in the world. They say idle hands are the Devil’s workshop, Lynn was on the go 24/7, but never sacrificed quality over quantity.

Lynn had a very successful career racing, building snowmobile race engines, and helping other racers. At the peak of it all somehow the timing was right for a new challenge—break the world’s snowmobile speed record. 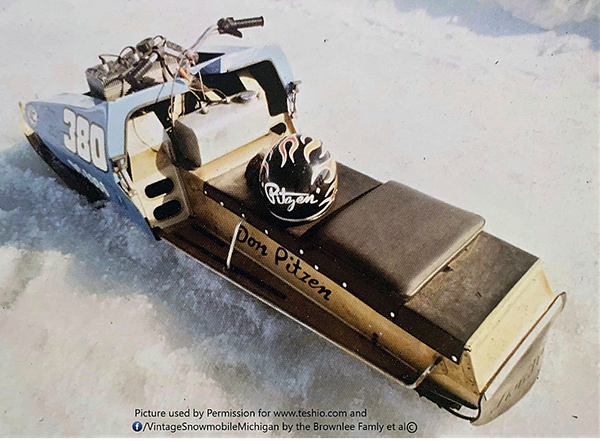 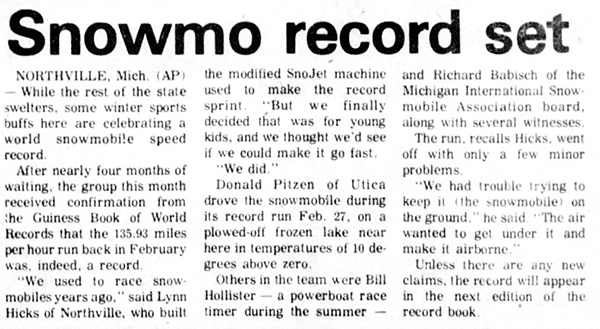 He, his family, and friends over a couple of years turned the Thunderjet into a force to be noticed and feared in Speed Run Circles. Lynn did most of the engine work himself. A lot of magic with many different Hirth parts. Just glancing at the photos you think it’s just a Hirth 793cc Honker Triple built up. That is not the case (pardon the pun)!  Lynn custom made a super monster Hirth 975cc Triple by using Twin Free air Hirth 650 parts. Wow! He had friend and expert machinist Ray Hitchcock from Portland (Michigan) engineer and craft two Hirth 650 engine crankshafts into a triple crank. Lynn ported and polished Hirth 650 cylinders (325cc each). Two stroke motorcycle and snowmobile racers often take the term, “There’s no replacement for displacement.” with a grain of salt. The real secret of creating ultimate power from a two-stroke engine is in the exhaust. Lynn was a wizard when it came to designing and hand making custom exhaust systems—he even had his own Dyno for testing engine performance! Next came an issue that most wouldn’t think of, how do you get the correct amount of fuel into a custom engine? Lynn calculated this and got with world-wide known Walbro Carburetors just 80 miles, as the crow flies, north of him in Caro, Michigan. For different atmospheric conditions Walbro made eight sets of special carburetors to Lynn’s specifications. Of note, beyond the engine, they installed the longest, toughest, snowmobile track they could get their hands on. They even took the sled to a wind tunnel testing aerodynamics.  Lynn named the sled “Thunder Chicken.” 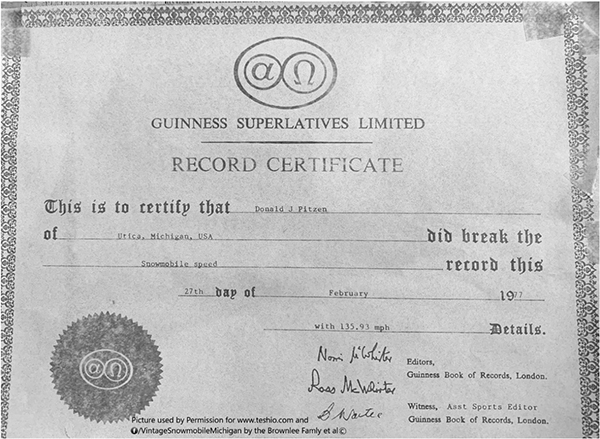 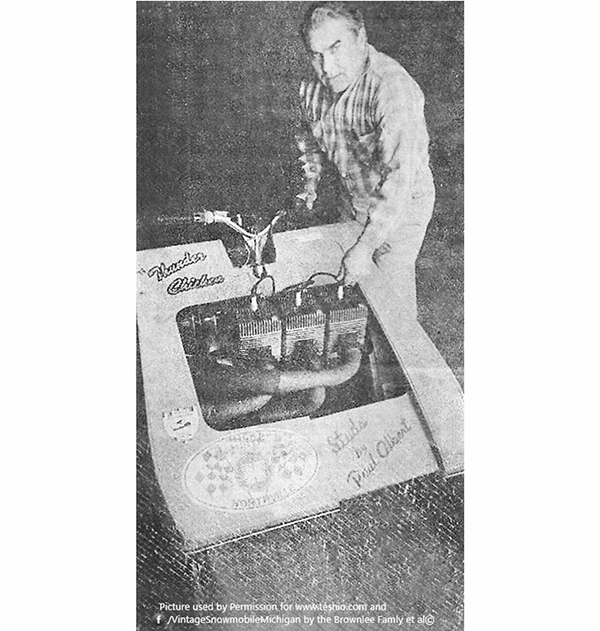 Donald Pitzen was tapped to drive the sled in the record attempts. Pitzen had a lot of snowmobile racing experience and was darn good at it. He was cool under pressure. Lynn liked and trusted him.

In February 1975, they went to the Anchor Bay Bonanza on Lake St. Clair that was hosting a Sunday feature of Snowmobile World Record Speed Attempts to bust the 127 mph mark set by Yvon Duhamel from Quebec racing for Bombardier ski-doo. While no record was set that day because of lousy track conditions (weather) Lynn’s Thunderjet had the fastest speed at two 95 mph runs. No small task considering they were going against the likes of Norm Miller on an Arctic Cat and the colorful Tom Santo’s Polaris with the motor set-up by well-known engine builder Jerry “Doc” Bork. In the end, they all learned much. It was a good day.

After another couple tries over two years on Anchor Bay Speed Runs and other events Lynn felt it was best to find another location for a myriad of reasons.  After some research Union Lake was chosen.  The lake was known for consistent smooth ice and being just shy of 1.5 miles long it worked because not only was Thunder Chicken fast, but it was also quick. February 27, 1977, would be a day to remember. 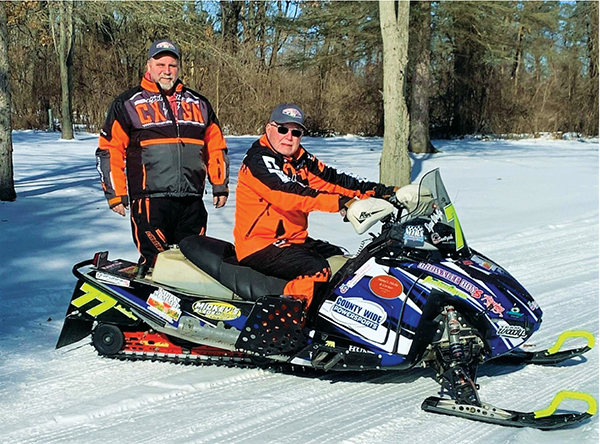 The team and the sled were ready; coordination with timing officials to be there went great—the big day came. Lynn never let the sled go 100% for the first couple practice runs. They started out with a Lynn standard then they wicked it up each run. Once the sled was on near final dial-in the only minor issue was keeping the snowmobile on the ground because too much air was getting under it. Minor issue? To the talented Lynn Hicks and his team they quickly worked through it. Now was time for that 100%.

The local snowmobile club was called the Union Lake Snow Owls.  No Owl was going to catch Lynn’s Thunder Chicken that day—they did it!  With ice in his veins Pitzen blazed pass the timing gate at just under 136 mph to break Yvon’s 1972 Guinness record. WHAT A RIDE (that must have been)!

Later that summer after Guinness office review of methods and standards it was official, Lynn’s Thunder Chicken team held the Snowmobile Speed Record.

Next year Lynn’s team tried to up their record. However, it wasn’t in the cards. Soon after Snowmobile Speed Run sleds became very exotic due to rule changes, most really didn’t looked like regular snowmobiles. The team proud of what they accomplished just went on to other interests.

Lynn is sadly gone, but his competitive snowmobile spirit lives on through his relatives — Michigan’s Brownlee family of snowmobile racers and Brownlee Boys Ice Oval Race Team on the MIRA Circuit who also compete at the Soo I-500.

Huge thank you to the Brownlee and Hicks families for allowing access to their extensive photos and documentation.  This story is in honor and lasting memory of Lynn Hicks. If anyone has more to add please reach out to Michigan Snowmobiler + ORV. Thanks! 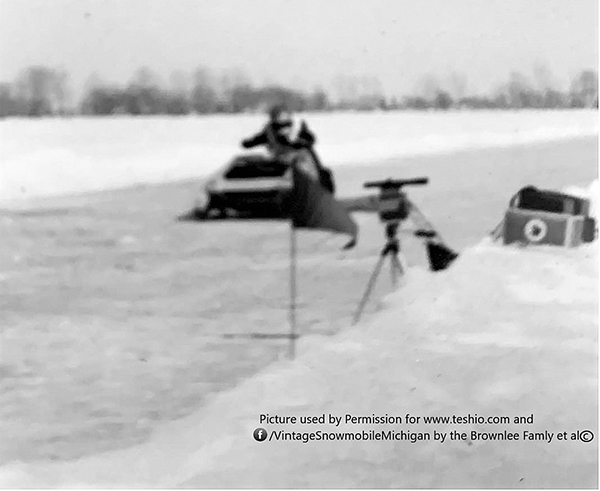