Remembering the First Ride of the New Year!

Skies were a heavy dark gray this Tuesday morning, but it was only 7:45am as we got the snowmobiles out of the trailer and prepared to head east toward the Soo. We had received an invite to visit the Kewadin Casino at Sault Ste. Marie that was hard to turn down, with the extra points for gambling and very low room rates for our lodging, it was just the answer we had been hoping for, and a reason to set our sights on a road trip… or rather a trail trip, a week or so into the New Year!

Originally, there would be four of us on this ride, but almost before we turned a track, some discussions arose as to how we would ride, where, and when we would be stopping along the way. My daughter and I felt we should make it as safe as possible by staying on the groomed trails while the “hotdoggers” wanted to play off trails wherever the deep powder presented that opportunity. We agreed to go our separate ways and meet up again at our destination, talk about what we encountered along the way, and then enjoy our short stay before moving on to our next destination on the agenda.

The only thing we had any concern with was which way we wanted to go to get there, and how long did we want the ride to be. We could easily just jump onto trail 8 and follow it almost directly to the casino resort in the Soo, but that trail meandered north and south almost as much as it did east and west. If we stayed on it, we would ride through the communities of Grand Marais, Newberry, Paradise, Brimley, Strongs, and Raco before we even saw the lights of Sault Ste. Marie. But the alternative would be to travel the trails south, which would require several trail changes, but more importantly, would the snow cover be adequate?

Another check of the snowmobile map showed trail 8 from home to Shingleton then trail 41 south toward, but not into, Manistique where we would pick up trail 2 east. The map was several years old so we were only looking at it for an idea of distance between stops for fuel and a warmup rather than directions. The plan, should we go the southern route, would be one of the two options, either head north from Rexton, to Trout Lake, then to Strongs, and then be back to the east on trail 8 again, or from Trout Lake continue east to Rudyard, then to Kinross and north following the trail into Sault Ste. Marie. There were a lot of “what if’s” to be considered before the final decision was made. Our other two companions, however, had already made up their mind to “just wing it” and stay to the north, playing in the powder wherever they found it while heading in an easterly direction, eventually ending up in the Soo.

My daughter suggested we just follow the trails east and make snap decisions whenever it became necessary, so that’s what we did. We met up with our other companions at trail 7 where Ridge Road connects and the ride to Shingleton was smooth and rather quick, and after a brief stop for breakfast and fuel, where ready to continue on our way, but this is where we also split up, with the “hot-doggers” going north on trail 8 while we started south on trail 41. Just north of Manistique, we picked up trail 2 and turned east, took a short warm-up break at the gas station near Blaney Park, topped off the fuel tanks, and continued on trail 2 east, passing through Gould City and Engadine, and into Naubinway where we again stopped to warmup at the Top of the Lake Snowmobile Museum. We decided perhaps this was a good time to take a lunch break as well.

Getting the latest updates on what to expect on the local trails and whether it would be best to go to Newberry or stick with our initial plan and head to Rexton. Where Trails 2 & 9 connect, we met riders that had just left Newberry and said the heavy traffic was taking a toll on the trails up that way, so we turned south on trail 9 and rode into Rexton and the Trail Stop, bought a few snacks, and although we didn’t really need fuel yet, went ahead and topped off again.

After discussing trail conditions with other riders who had come from Strongs and Trout Lake, we tentatively decided to avoid the more heavily traveled areas and took trail 473 into Trout Lake, trail 47 north to the junction with trail 472, and headed east toward Rudyard, which was both a good and a not so good call. It was good because not many snowmobilers had been on it since it was last groomed and traffic was light, in fact we only saw six other riders between Trout Lake and Rudyard. It was not so good because the wind had picked up causing some major drifting and periods of very poor visibility, but by reducing our speed and being careful to not get off the trail, we managed to find our way into Rudyard.

We stayed on trail 472 and got to the eastside of I-75 without any problems and made our way through Kincheloe to trail 49 and turned north toward our destination. It had been a long day and we were definitely ready for it to end. When we reached the junction with trail 449, we knew we were on the final leg of our journey and followed 449 right into the parking lot of the casino resort. Once we got checked in we began to feel a little better and after a leisurely dinner, we spent only about an hour in the casino before calling it a night.

Overnight had produced a few inches of fresh snow for Wednesday’s ride and we elected to just remain in town and ride wherever the local trails took us. Not looking to start too early, the rigors of the previous day’s travel was still present in the way of sore muscles, but after a hot shower and a hearty breakfast, we got ready and headed out on our local adventure.

Our first stop as we headed back through town was for fuel just before we crossed the I-75 business route then followed trail 49 to the waterfront, going through the tunnel under I-75 in the process. At trail 8 we turned right and rode along the shoreline, across the channel bridge and eventually came to the Soo Locks. We found a suitable place to leave the sleds and walked around town, stopping at several gift & curio shops. Although we weren’t very hungry, we went to a local diner to warm up and had a light lunch before returning to the sleds and continuing our ride.

We made our way back along trail 49 passed the airport and entrance to the I-500 track, got safely across the business spur again, and eventually wound up in the Walmart parking lot. We picked up a few items here, some we needed and some we just wanted, before heading back to the casino. We put the travel covers over the sleds, went up to our room, and after a short rest we called to see if our companions were in house or still out playing. Since we didn’t make contact with them, we made our way down to the casino and spent a few dollars at the slot machines, as well as at the bar. Sometime around sunset my phone rang letting me know our friends had returned and invited us up to their room to swap stories about the day’s adventures.

As we shared stories and had a few cocktails, we found that our companions didn’t intend to return home as previously planned but were thinking of riding south to Cedarville and maybe visit Drummond Island before heading back to Munising, so as we finished out the evening with a nice dinner in the casino restaurant, we said our goodbyes and bid them well. Our own plan was to be up early Thursday morning, grab a quick breakfast and be on our way home before the sun got too high in the sky. We would be taking the northern route west on trail 8 but would take any shortcuts possible to minimize the mileage home, but considering the weather reports, that remained to be seen. 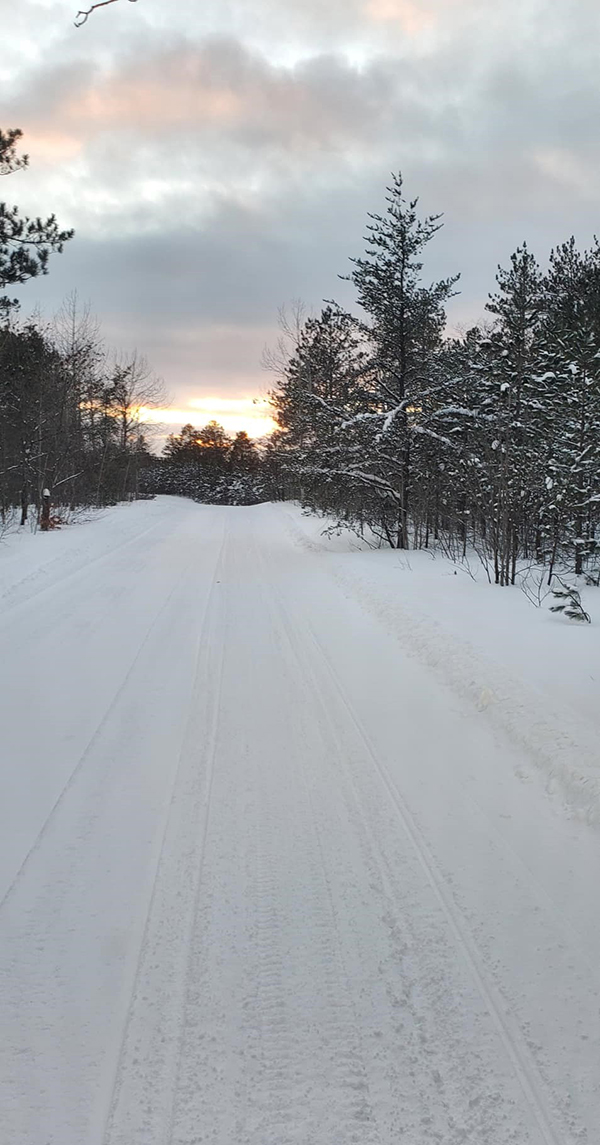 Once through the tunnel and onto the grade, travel was fast and smooth, and this early in the morning traffic was almost non-existent, and being so early, we decided to stop in Brimley for a warmup with a steaming cup of coffee. We stopped again briefly near the old Raco Store to check the map and discuss whether it would be best to stay on trail 8 and see what Paradise was like, or continue west on the grade, now trail 47, to Strongs. We agreed we wanted to take less time and less miles, but there just isn’t a good, direct way to Newberry. We decided to stay on trail 47 and go through Trout Lake then trail 473 to trail 9 and then back north to Newberry simply because the distance appeared considerably shorter going south.

Somewhere between Trout Lake and Rexton the wind began to pick up and visibility became so poor in spots that we had to reduce speed almost to a crawl. We even considered reversing course and trying the northern route but if conditions were similar, we would have wasted a lot of time and been out in the elements just that much longer, so we stayed on trail 9 and eventually found our way into Newberry. With the falling snow and dropping temperatures, it didn’t take much to convince me that we should find lodging and try it again the following morning. I think that was a smart decision, so once in a warm room we called home to let everyone know we were alright and would be another day before getting back home.

Friday morning was bright and blustery with a temp near zero, but we got the sleds started and rode north, knowing we would be changing trails several times with limited places to refuel, we stopped to get as much fuel into the tanks as possible before leaving town. We took trail 9 northwest to trail 431, then 431 to trail 443 then 443 north to trail 88, and finally trail 88 to trail 8 and a stop just off the trail in Melstrand with both fuel gauges near the zero mark. We purchased some snacks, filled the tanks again, and within just a few minutes, was on our way home again.

Arriving in Shingleton and crossing M-28 seemed to breathe fresh energy into us, and as we turned west onto the Coalwood Grade it was difficult to keep from squeezing the throttle down, but we did manage to maintain a decent speed and just inside an hour we were turning onto trail 7 toward Christmas. We left the trail at Ridge Road and was glad to finally see the driveway again. It had been four days away and the snow was deep at the roadway where plows had been, but we jumped the sleds in and shut them off near the trailer. Trail trip #1 was in the books.

Total miles traveled was just over 800, and total expense, excluding gambling, just over $1100.00. Total enjoyment for the trip, other than the short burst of inclement weather… Priceless. •