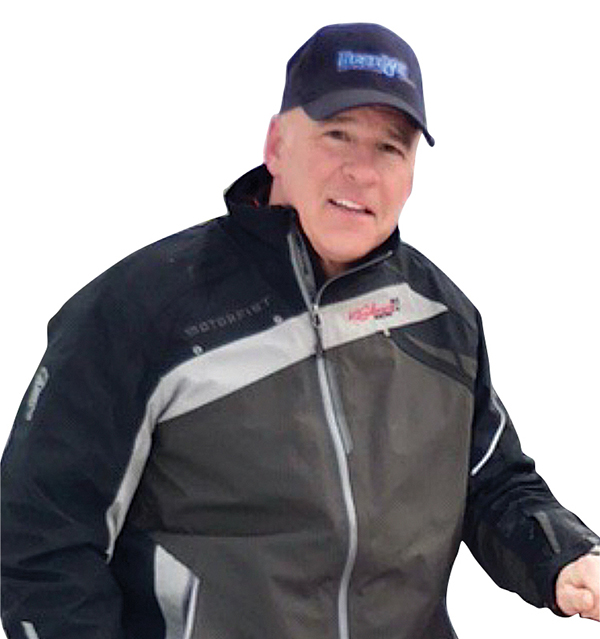 What got you into snowmobiling and when; what was their influence on you in regards to the sport? I have been involved in snowmobiling since I was 8 years old some 56 years now. My first race was on a 10hp Skidoo at the local winter carnival in my hometown of Rudyard Michigan. During the 60’s and 70’s snowmobiling was a really big deal with lot of manufacturers and the eastern U.P. produced some great racers. A big influence on me was Tank Mayor who I considered a local hero at the I-500 when I was a kid. In fact, I chased his record of number of races as a driver at the Soo (26) and I hung around riding long enough to get one more than Tank. My focus when I got serious and a little older was sprint racing. At 19 years old I would leave Rudyard in my pick-up truck with a 340 SRX and head to the races in the Grand Rapids area all alone. I would race(and win) on Saturday, sleep in the truck and do it again on Sunday and get back in time for work Monday morning. This is where I meet Larry Williams and his family by just parking near him one day. Larry offered to help me load the sled and we have been family and a big influence ever since. 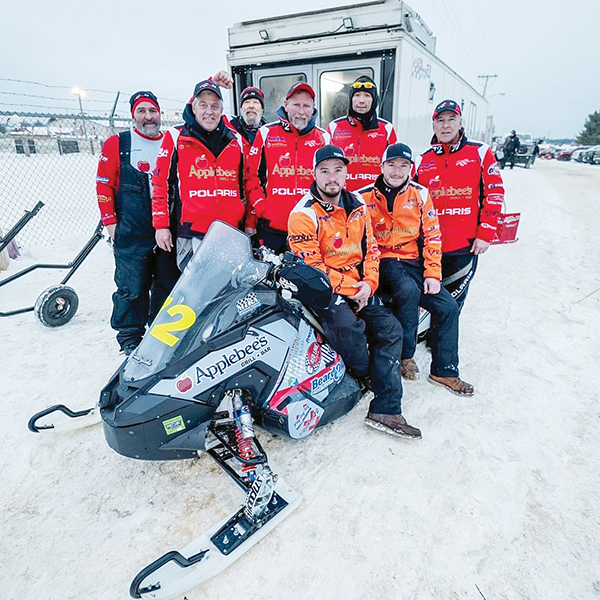 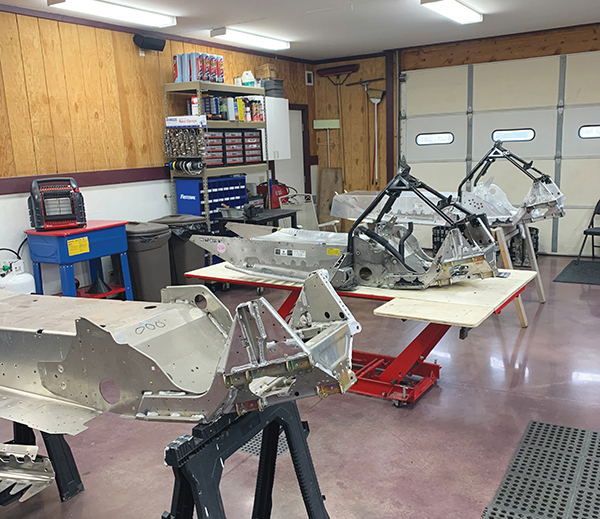 When did you start racing and what is your proudest achievement so far at the track? In the early 80’s I raced in the Sno-Pro class which was the premier sprint class of the era with some success. Larry and I hatched a plan to look into Enduro racing so we agreed I would try and ride for another team before we jumped in. Terry Spencer in 1981 gave me my first pro Enduro ride and I went from there. In 1982 Larry and I bought a sled from the king of the sport on the Ski-Doo side; Bob Benner and proceeded to win the Triple Crown of Enduro racing our first year. In 1984 I was privileged to ride with Brian Musselman for one of his 3, I-500 wins. From the great beginning we won the Alpena and Lincoln enduros, 13 sprint class championships and a major Twin Track (F-1) race in Canada, the Bonnechere Cup. I was able to win the first 2 MIRA Champ 440 championships when the Champ class replace F-1 as the top class. It was always important to me to compete at the sports highest level, and I have had success at each one of them through the years. The years make the memories fade a bit but a couple of the wins I remember best was the Alpena 500 lap Enduro race. I won by 42 laps over the next closest sled and rode the race just about alone. Larry Williams had me hooked up that day. The Soo win and the Bonnechere Cup wins were special. In that one I got run into the snowbank on the first corner and fought back to win it. I stopped racing at 58 years old and became the team owner which I enjoy very much. I am so lucky to have a great group of people and sponsors that I could not do without. I have so some many great memories and stories. I have been told I should right a book. I have meant some great people and made life long friends from this sport. I got involved with the business side of MIRA the first time in the 90’s and helped bring the back from decline. Once again, I had the Williams family at my side and my back. I took over the MIRA presidency for the second time 7 years ago and with a great team of passionate people( yes, a second-generation Williams) have made MIRA into the biggest and best ice oval racing group in North America. 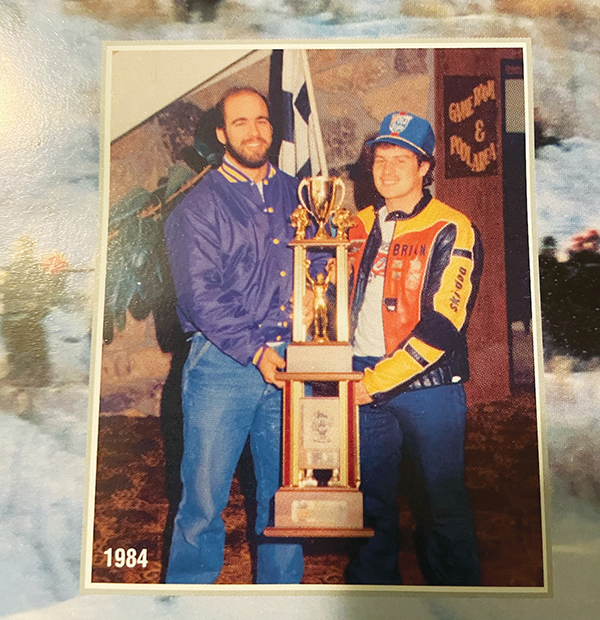 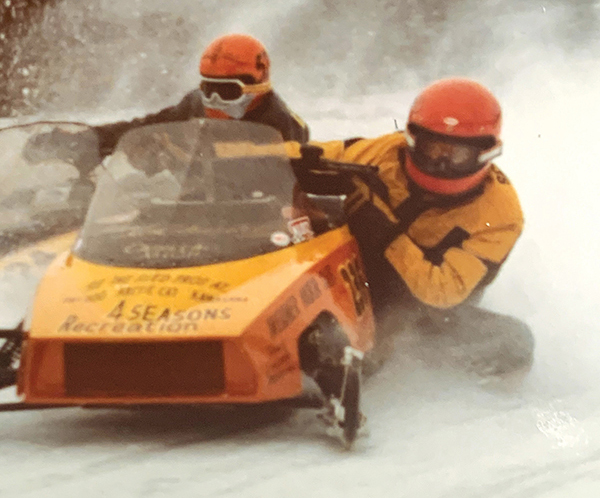 What is your career goal as an owner? Goals for this 2023 season are the same as they have been to win a MIRA points Championship which has eluded me all these years. Our circuit is incredibly competitive it a huge deal just to win a race let alone the championship. Along with this our goal is to put both my riders Jake Gerow and Andy Shoemaker in the finals at the 60th running of the Eagle River World Championships. If we can get either one of these guys qualified, they will be tough to beat come the final race.

What were the driving factors to start the race team?  With out the support of Apple Bee’s, Polaris, Beard Oil Dist. Redline Oil, Krist Oil, Northern Clearing, Woody’s(who has sponsored me for over 40 years) and East Edge Graphics, I just couldn’t race at this level.

For us this is an 11 month per year operation and if anyone ever wants to stop in the shop in Freeland MI., you’ll find us there every weekend working on our fleet of Polaris sleds. Hope to see a huge turn out for what is shaping up to be the best MIRA race season ever,  Karl 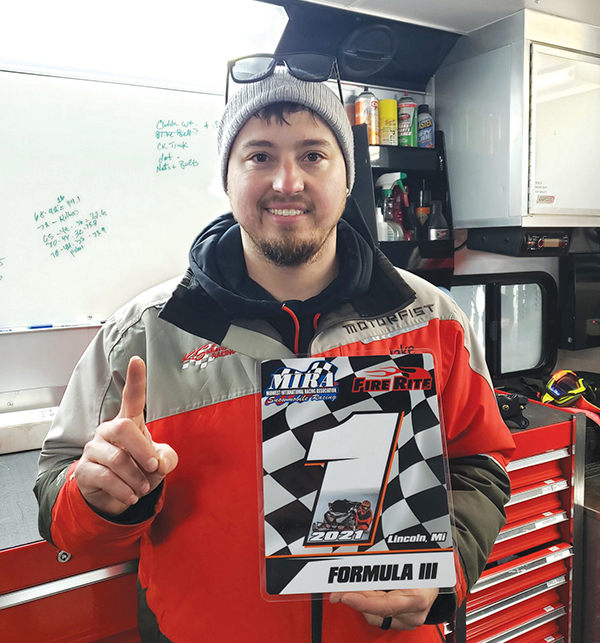 Who got you into snowmobiling and when; what was their influence on your regard to the sport? My grandfather Larry Williams has had my family into snowmobile racing since the late 70’s. He passed down his love of the sport to his son/daughter Mike Williams, Kim Baker and then down to me. I would watch my grandfather year-round work on snowmobiles in the garage with Bob Benner and Karl Schwartz. So needless to say, I was born into racing.

When did you start racing and what is your proudest achievement so far on the track? I started racing when I was 3 years old on a kitty cat 120. I would race year-round. Karl Schwartz owned the Saginaw Powersports back then and would have wood chips hauled to his facility and we would race on them through the summer months.

I would have to say my proudest achievement on the track would be last year in the 2022 Eagle River World Championships I took home a podium finish. 3rd place finish did not come easy as the Karl Schwartz racing team showed their true colors. We struggled all week with handling issues and the team came to me and told me they were going to throw the kitchen sink at it for the final. What they meant by that is they gave it everything they had to give me the best chance to go win a world championship. They did exactly that, and I rode the sled all the way to the 3rd place podium finish at the world championships with the kitchen sink thrown in it. A memory I’ll never forget and am so thankful to be able to do what I love with Karl Schwartz racing team.

What is your career goal? My career goal is to finally win a points championship in the MIRA racing enduro circuit, win a world championship, and win the I-500.

How did you become part of this racing team? Karl Schwartz was looking to bring new young faces into racing back in 2010. My grandfather who was on the team had told Karl that I was looking into getting into pro enduro racing. Not long after, Karl approached me with a deal I couldn’t pass up. I get to race alongside the guy I looked up to as a child, in racing. It feels like life has made a full circle. Karl raced for my grandfather in the 80’s; and they as a team won many races including the triple crown in 1982 and the Soo I-500 in 1986. With Karl as the leader of this team we have won a plethora of races as well as a championship in 2021 on the F3. I feel at home here since Karl has been around my family since even before I was born. Watch out for team #72 Karl Schwartz Racing this year as we intend to be a front runner in every event we enter. 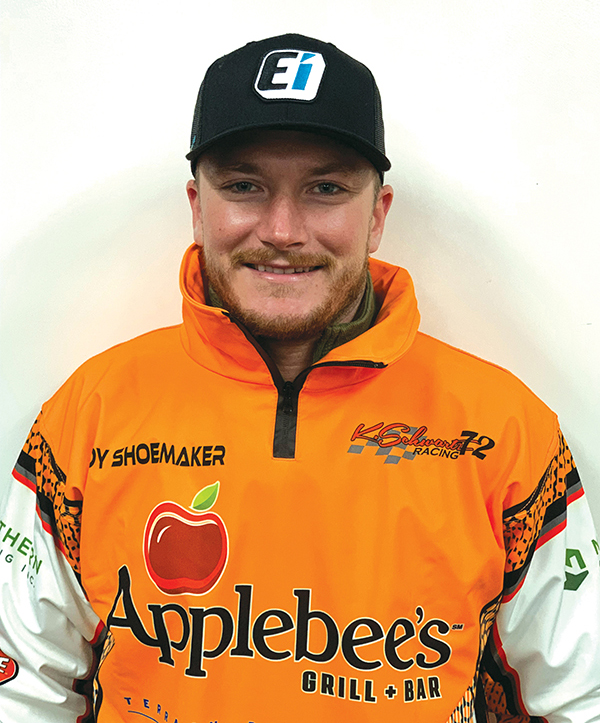 Who got you into snowmobiling and when; what was their influence on your regard to the sport? My dad (Tom Shoemaker) got me into snowmobile racing when I was at least 4 years old, he raced through the 80’s and 90’s and was in the sport as a racer until the mid 90’s. He then was the crew chief for the Millenium Motorsports 42 team from mid/late 90’s to 2021 and in that time, I started racing for him in 2011. I was always fascinated with snowmobile racing for as long as I can remember because I watched him to do it for many years and that’s what made me really want to do it.

What is your career goal? Win the MIRA Pro-Enduro points championship and win an elite race like the Soo I-500 or the Eagle River World Championship Race.

How did you become part of this racing team?  Karl Schwartz extended an offer to me to ride for his team in 2021 and I accepted. 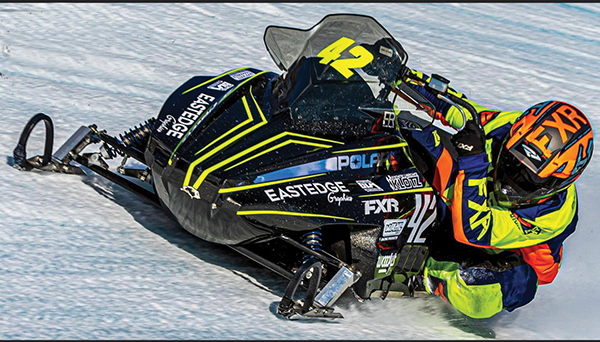 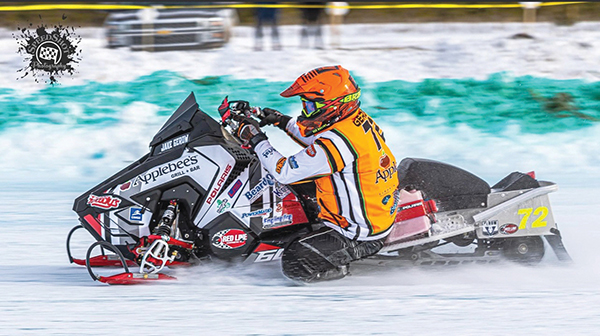