After a postponement last year due to the coronavirus pandemic, on February 12th 2022 hundreds of participants and spectators braved the bitter cold temperatures to bear witness to the running of the 30th annual event and snowmobile ride. At previous events, the number of registrations have totaled over five hundred and from the number of vehicles with trailers lining both sides of state highway M-94 for a half-mile or more in each direction, it would appear this year’s event has, once again achieved a similar record.

Considering the longevity of the majority of snowmobiles present, the name “relic” for this ride is most appropriate, and although all machines are welcome regardless of age, only those twenty-five years or older were eligible for awards. Sleds were judged  in categories such as best of show, most unique, worst condition, senior (oldest), and even a loudest pipes contest where the machines had to be 1973 or older to be eligible.

With the smell of two-stroke exhaust hanging heavy in the air, snowmobiles were lined up for display early Saturday morning and what a variety of sleds it was. Some had been completely restored to factory specs and were in showroom condition while others looked like they had been stored in a barn somewhere and had not been touched in years. Then there were the few that appeared as though they had been abandoned and left to sit outside through a decade of severe storms, had somehow been recovered and were still capable of starting and running.

The primary host and assembly point for the Long Riders events is the Jack Pine Lodge and Campground and many participants arrive on Friday filling the parking lots to overflowing. The lucky few who were able to secure lodging in one of the six cabins available on site shared their good fortune with other attendees around a campfire with plenty of stories from events past. 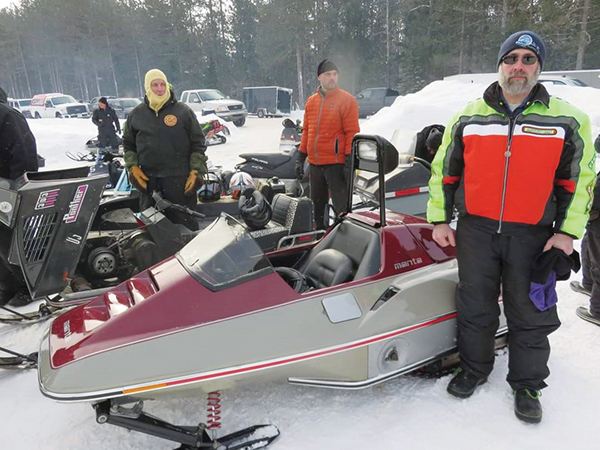 The ride has traditionally been between the Jack Pine Lodge and the Boot Lake Bar, both of which are located on, or in near proximity to state highway M-94, and both located in Schoolcraft County between Shingleton and Manistique and, as the name implies, is usually somewhere near the century mark which is an exceptional feat for the “old iron” to complete.

This year, however, the relic ride began as usual from the Jack Pine parking area after the judging of antique & vintage snowmobiles had been completed, but instead of heading toward the Boot Lake, went just a short ride of about fifteen miles to an area known as the Thunderbowl, an abandoned ski hill and where there’s plenty of room to exercise the old iron and check it’s durability. Due to the age of most machines, there were a couple of scheduled trail stops in between to allow everyone to regroup and make sure no one was left behind.

As previously arranged, Cheryl’s Catering was on-site with a food tent set up and ready to serve lunch. This was an extended break for the riders and several took the opportunity to make minor adjustments to their machines while others wandered among the sleds, discussed their history, and what it takes to keep the old iron in running condition or the cost for restoration. 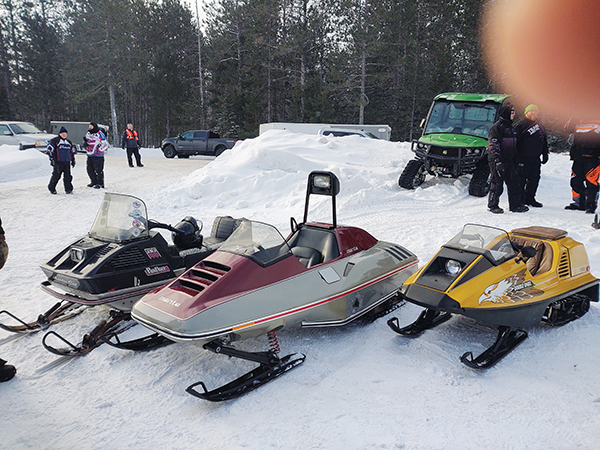 Once the noontime festivities were completed, the riders fired up the machines for the rest of the day’s trip. The afternoon trail stop was in the village of Stuben at a little convenience store with available fuel and other amenities. There was also a food tent set up here with hot dogs, chips, beverages, etc. available. Returning to the Jack Pine, the 2022 Relic Ride for charity was completed and in the record books, but the festivities would continue throughout the evening, with plenty of socializing, reminiscing, and planning for the next event.

Comments were jokingly made that perhaps the group should consider a name change since Long Riders didn’t seem to fit anymore, referring to the fact that it was just thirty miles round-trip. Although this year’s ride was much shorter than most of those past, the donations raised was not, and all will be distributed to the selected charities for this event. Those selected were the Highway 2 Community Drive-In; the Upper Peninsula Honor Flights; the Eva Burrell Animal Shelter; and the Manistique Little Jiggers Ice Fishing Derby.

It seems like the interest in antique and vintage snowmobiles is increasing in popularity with every passing year, as witnessed by the number of ride participants and spectators that show up at this event every year. The money raised is always for a good cause and dedicated to local charities. Plans are already underway for the 2023 event and is expected to surpass this one in attendance.