During the past thirty-five plus years I’ve been involved with organized snowmobiling, I have met, and in many cases, retained friendships with fellow snowmobilers from all around the globe… hundreds, maybe thousands in number. The majority, of course, is located in the lower forty-eight United States, but there are also several friends across our northern border in just about every province of Canada as well as across the big pond in the Scandinavian countries of Norway, Sweden, and Finland, and although I haven’t been in contact with them for quite some time now, I did meet and remember a group of enthusiasts from Russia a few years ago at the International Snowmobile Congress.

The question is, where have many of these acquaintances gone and why did they, if they in fact did, quit snowmobiling? The follow up question then would be, what are they doing now to fill the void, or time, once taken up by snowmobiling activities? Curiosity getting the best of me, I began researching this dilemma and most of the answers I received from inquiries were as expected, while some of the others were somewhat surprising.

Let me begin by saying that in every case, those I contacted with my unofficial survey said they totally enjoyed the years they spent snowmobiling, and cherished the many friendships fostered through their mutual interest in that choice of winter recreation. While a few of them said it was advancing age and diminishing physical abilities that prevented them from continuing, there were about as many that said the rising cost to remain engaged in snowmobiling was just no longer in their budget. The largest response, however, said other outside activities with new interests was the primary cause. What I found most surprising and quite honestly the most disturbing, were the few who said they had given up snowmobiling not because they no longer enjoyed it, but that they were driven out due to the conduct, attitudes, and discrimination of (false) friends.

While I can readily identify with that first category, not so much due to the the advancing age because I have several snowmobiling compatriots that are well beyond the legitimate age of retirement, and I myself became an octogenarian almost a half-decade ago, but as for the diminished physical abilities, I find it increasingly difficult to get myself unstuck from a snowbank, or to pick up the backend of a sled and move it around as I once could. Because of this I no longer venture off-trail and adhere more frequently to the requirement to “never ride alone”, but as yet I have not even once considered giving up this favorite wintertime activity. 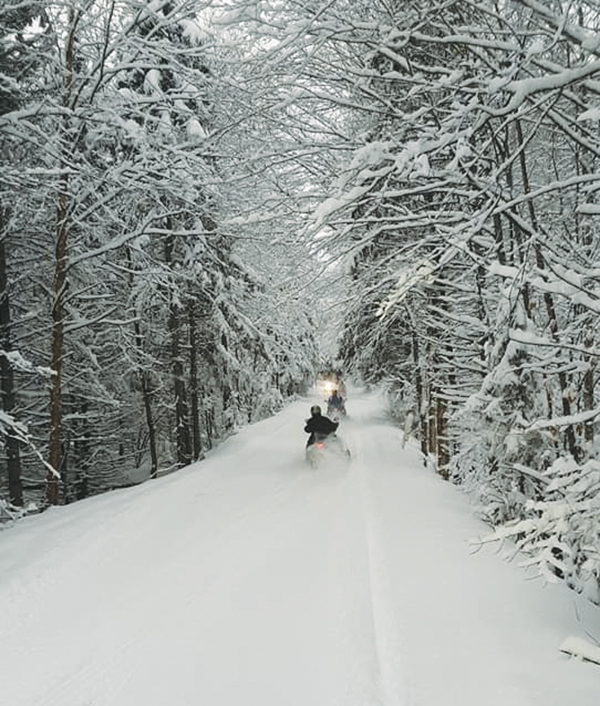 I can even see where the rising cost to remain active in snowmobiling might be a deciding factor for some, especially those with a family to support and a demanding job to contend with. When I first became involved the average cost of a new, entry level, snowmobile was between two and three thousand dollars, and a top-of the-line sled less than seven thousand. Today’s prices, in most cases, are three or more times that amount thanks, in part at least, to the demands of the Environmental Protection Agency (EPA). Also, trails, what little there were, used to be best smoothed out by dragging an old bed spring behind a snow machine. The cost of developing trails and maintaining them in a safe and smooth condition today has become a major expense with the price of a tractor and grooming implement exceeding a quarter-million dollars.

But when we consider everything equally, the cost of doing business, the rising cost of commodities, and the overall cost of living have all increased dramatically. Lodging back in the 70’s could be found for between $35 and $50 per room and fuel was, in many cases, less than a dollar a gallon. In order to stay abreast of the new technology and find adequate funding to provide quality trails, enter the era of the Trail Pass, which by the way has increased periodically to keep pace with the rising cost of everything else.

In discussion with those who claimed to give up snowmobiling to pursue other outside activities or with new interests as the primary cause, I found most were discouraged by the shortness of the winter season and the fact they could basically have the same experiences year-round with a side-by-side off-road vehicle or an all- terrain vehicle for less than, or about, the same expense. I did find that several folks in this category had not given up their snowmobiles, they just weren’t using them very much if at all anymore and didn’t purchase a trail permit until they were sure they would be riding the snowmobiles.

Of those who said they were giving up the sport all together, sold their winter recreation equipment and apparel, and in some cases, relocated to a warmer climate during the winter months, in almost every case it was not the lost love of snowmobiling but instead was due to inconsiderate, disrespectful, and in many cases unwarranted rude behavior but other snowmobilers on the trails or personnel in a snowmobile-related business or organization. In very few cases, mostly where multiple sleds were the issue, did the increase in cost of trail permits have a bearing on the decision to no longer be an active snowmobiler.

In summary, with an increasing number of snowmobile clubs reporting a decrease in their active membership rosters, the question to be asked is “after snowmobiling, what?” Statistics show recreational pursuits overall are on the rise, so why is snowmobiling activities not seeing that much of it? There are plenty of answers to that question, some valid and some just speculation, but the fact remains that there are still plenty of avid snowmobile enthusiasts anxiously awaiting that first snowfall and praying for a record winter season. Will the 2021 – 2022 season be the one? If not, after snowmobiling… then what? •