The 2021-2022 Snowmobile Season has just begun and already the complaints have started pouring in about snowmobilers running amok, disregarding signs and, in general, creating problems between landowners and the grant sponsors who are struggling to keep the trails open. In many areas the trails haven’t even been groomed yet and where they cross private property, permission to do so is in jeopardy. Why?? Because snowmobilers, albeit just a few, refuse to play by the rules and can’t or won’t stay on the allotted trail corridors.

Early snows and recent storms have brought significant amounts to permit snowmobile use, but the warm temperatures have, so far, prevented the frost from penetrating deep enough to allow the ground to freeze, and especially the wet, low-lying sections of trails throughout the state. The anxious riders that feel the need to be first on the trails are, in some areas, damaging the prepared surface before any base can be established and, in many cases, even repaired. The bulk of complaints, however, aren’t about the trails, but about riders not staying on them!

Trespassing on privately owned lands is nothing new, but the issue has been escalating at an alarming rate the past few years. The grant sponsors initially tried to take care of the complaints around their own trails by going to the landowners personally with attempt to make amends, however, this has become so common with almost every tract of land in private ownership, that it has drawn attention from the DNR’s Snowmobile Program Administrators as well as the DNR Director himself. 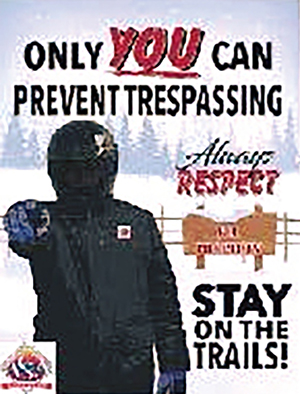 A few years ago, the Snowmobile Advisory Workgroup (SAW) established a committee to look into the trespass problems and after some initial research, found that with the rising popularity of off-trail riding, or more commonly known as backcountry touring, most snowmobilers involved were not even aware of where they were, much less who owned the land they were riding on. The problem was further exacerbated due to the State taking the position that all public lands under DNR control were open unless specifically posted otherwise.

Through some rather intense discussions between program managers and trail sponsors, an agreement was reached where the DNR would create signage to be displayed wherever private property was being trespassed on, and where trails crossed private lands, a “Stay on Trail” sign would be prominently visible. Unfortunately, to date these signs have had little effect on the number of trespassing complaints being received almost daily. DNR Conservation Officers and Sheriff Patrols have tried to work in areas where the bulk of complaints come from, but resources are few and complaints are many. So many that some landowners say they are fed up with failure to remedy the problem and are considering rescinding permissions to cross their properties. At last count the number of miles of trails lost has exceeded four hundred, and many more miles are in jeopardy.

Where the “No Trespassing” signs have had little effect, there is another method of posting one’s property that has been around for quite some time in seventeen other states, six of which permit snowmobiling, and is beginning to catch the attention of both the property owners and state officials in, and around the Great Lakes. In Michigan, State Senator Vanderwall introduced SB-106 in February of 2021 to amend PA 451 of 1994, better known as the “Natural resources and environmental protection act.” by amending several sections of other Public Acts, all having to do with illegal entry by anyone onto the property of another, or as we know it “Trespassing”!

In amending Section 73102 for example, either by addition or deletion of a single word or sentence, it remains fairly intact as originally written, approved, passed, and enacted into law, which includes the posting of signs, erection of fences and/or barricades. The amendment, for lack of a better title, we can use the same as those other states, which is the Purple Paint law.

In the amending Section, subsection (b) has been divided into two separate entities, where (i) measurements for lettering and minimum size of signs, the primary verbiage remains unchanged, however, (ii) is the added amendment which reads: By placing purple paint marks on trees or posts around the property with paint approved for that purpose by the department Each paint mark shall be a vertical line at least 8 inches long, and the bottom of the paint mark shall be between 3 feet and 5 feet above the ground. The paint marks shall not be more than 100 feet apart and shall be placed so that they are readily visible to persons approaching the property. 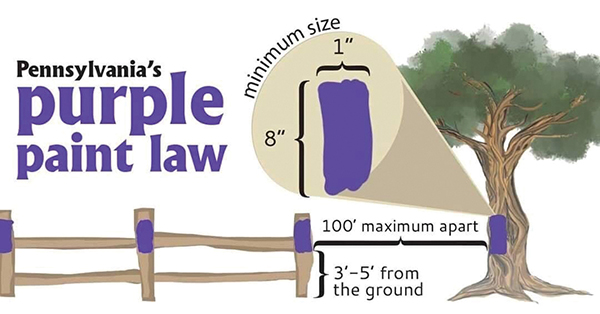 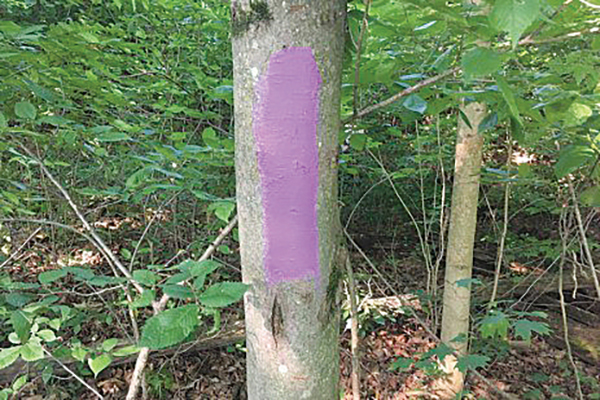 Subsection (1) specifies that except as provided in subsection (3), a person shall not enter or remain upon the property of another person to engage in recreational activity or trapping on that property without the consent of the owner, or his or her lessee or agent.

As written, this bill is quite explicit for both identifying private property and for the issue of trespassing on said property. How it will be enforced remains to be seen, as well as what penalties will be applied for violations. As this bill slowly makes its way through the legislative process, grant sponsors must still contend with complaints about those snowmobilers that disrespect the law and continue to ride in prohibited areas and on posted private properties. At least the state agencies are aware of the problems and the lawmakers are making efforts to resolve them. This bill is believed to be a step in the right direction.

In the interim, the task of policing ourselves falls to the local clubs, the councils, and the associations of organized snowmobiling. For the trail riders, the most simple chore is to stay on the trail and not venture off of it unless we know for sure it is permissible to do so, obey the signs and ride in a safe and responsible manner. For the backcountry riders who prefer the deep virgin snows to the groomed trails, just know before you go is the name of the game, and don’t go until you do!

Many years of hard work and countless hours of social pressure have given snowmobilers a positive reputation and a general acceptance in almost every community across this great country of ours. It would be a shame to have that reputation tarnished by the few disrespectable riders that refuse to conform to the code of ethics most other snowmobilers abide by. Yes, it’s a new season, but it’s still the same old issues! •