Seems like every time snowmobilers get together the topic of “greener pastures” comes up and where the best riding areas are located. Granted every snowmobiler has their favorite riding style, their favorite riding companions, and of course their favorite brand of snow machine. But once discussions become story time and each participant tells of a memorable snowmobiling trip, we all get to thinking that it would be a great adventure to wander outside our own state and see what other states have to offer in the way of winter recreation.

In the past four decades plus a few extra years to boot that I’ve been involved in snowmobiling, I have been fortunate to have experienced at least one ride in almost all the Great Lakes states, and with few exceptions have really enjoyed them. Also being in such close proximity to the neighbors to the north, I’ve had some wonderful experiences riding in the provinces of eastern Canada. I’ve had an opportunity to ride in only a couple of the states west of the Mississippi, but every one of them was unique and memorable, and I highly recommend planning a trip “out west” whenever time and money permits.

Obviously, living where I do makes border busting an easy endeavor, both jumping over the bridge into Ontario, Canada or making a short jaunt southeast into neighboring Wisconsin. I, for one, would strongly support trail pass reciprocity between states similar to registrations and licensing, but I know that is highly unlikely to ever become a reality, especially since most state funding for trail maintenance and grooming comes from the trail permit fees.

It’s unfortunate too, that the coronavirus pandemic has closed the border and restricted travel. While communicating with my Canadian friends, they say it’s created such a hardship for snowmobile related businesses that many have had to close their doors, and some may not recover once this virus issue has passed. That is pretty much the same in most of the states as well, The focus of this writing is one destination to Yellowstone National Park in the western United States, and one into the eastern reaches of Canada’s province of Quebec. With so many trips in both directions and in both countries, perhaps there will be more recollections in print at some later time. 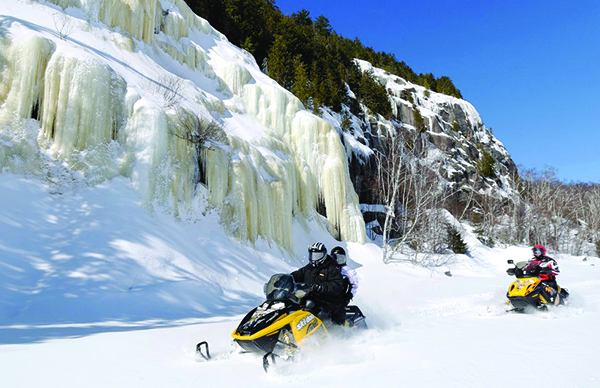 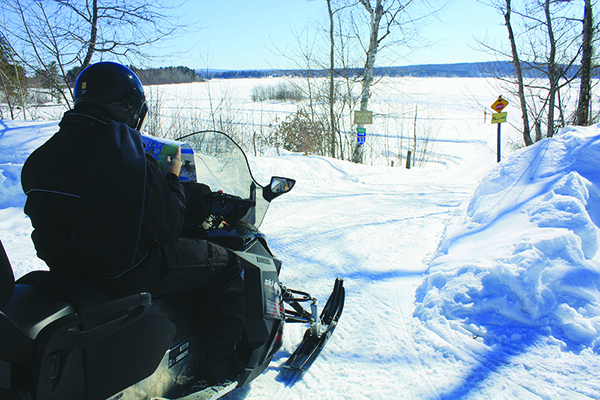 I was fortunate to have snowmobiled in Yellowstone National Park before the restrictions were implemented and the group I rode with were all seasoned riders so we were pretty much free to ride anywhere open to snow vehicle travel. We did see plenty of wildlife and several geysers spewing hot spray and steam into the air, including “old faithful”, but the most impressive for me was the herds of bison roaming the fields and roads throughout the park.

The one thing I learned too late was that the ravens (crows) that frequent the parking spaces at the Lodge are very intelligent and can open a zippered tank or saddlebag in quicker time than most humans can, and they will get everything inside them out just about as quick. I’m told that this is still occurs with every snowmobile visitor there even today if they elect to leave anything with their sled while they go inside the lodge. 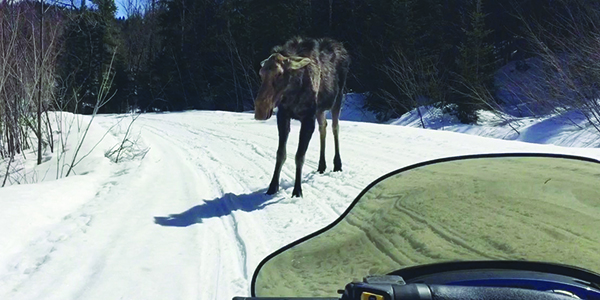 One final word about Yellowstone before we move on should be getting there and what to see once there. If driving, remember that the North Entrance is the only gateway open to vehicle traffic during the winter months and many roads within the park are also closed, so beware of trying to take shortcuts. Here’s another little bit in information that may prove helpful, and that I learned first-hand. It’s an hour’s drive to the north entrance from Livingston, only to find out that the only road open is the north road back to Cooke City and getting to the interior of the park is impossible from there.

If seeing Old Faithful is on the agenda, it’s best to just stay on the Interstate to Boseman and take US Hwy 191 south to the neat little Village of West Yellowstone. This bustling little community has just about everything in the way of lodging, restaurants, outfitters, sled rentals, and gift shops the winter enthusiast might ask for, and it’s just 3 short miles to the West Entrance of the park and Visitor’s Center.

Needless to say our ability to cross into Canada has been totally restricted for the past couple of seasons, but recalling the last trip I was able to make a few years ago, (11 to be exact), along with a couple of companions was a most memorable occasion. We had decided the dates for the trip should be in mid-March so as not to conflict with any major snowmobiling events in our own state, so with the snowmobiles trailered and luggage loaded, we crossed the Blue Water Bridge at Port Huron on the Michigan side and into Sarnia, Ontario on the Canadian side just after 3:00am on Thursday 11 March 2010. Once we cleared Customs at the border, we were excitedly on our way.

Our initial destination, the Village of St. Raymond, would be about a sixteen-hour drive under good conditions, but most of it would be on multi-lane highways until we were just a few miles east of Three Rivers, and we covered that in a fairly decent time. The only delays in the plan were navigating the traffic through Toronto and Montreal. Once past Three Rivers, we had to take secondary road #354 about 20 miles to the hotel we had selected for our base camp. We were grateful the parking lot was plowed and was large enough to park the trailer out of the way of other vehicles. Once the sleds were unloaded, it was time for a quick dinner, a few cocktails, and some much needed sleep.

Our room had double doors, one into the hallway and one to the outside where we had parked the snowmobiles the night before. As accustomed as we are to cleaning snow off our sleds, we were not prepared for the shock of seeing more than a foot of fresh snow covering the sleds.

We were also not ready for the instant freeze as we stepped out into the sub-zero temperature and the difficulty of getting the snowmobiles to start. The motel manager saw what we were doing and brought out an electric blanket and extension cords to pre-warm the engines so we could be on our way. We purchased the necessary “access permits” and were advised that there were trail patrols to check for them, especially when passing from one sector to another. We were also told it was best to not pass up the opportunity for fuel, even it was just a few miles apart.

The plan for the day was a loop ride to the east to Lac Sergent, the west to Saint Leonard then a return east to Saint Raymond, a distance we were told would be about a hundred and fifty kilometers, or just less than a hundred miles. Since we were unfamiliar with the terrain and whether we might encounter any unforeseen circumstances, we anticipated the ride take the better part of the day but allow us plenty of time to get back, get cleaned up and maybe see what nightlife was like in the French-Canadian countryside.

As luck would have it, the sun was already setting as we made our way back into town, so our nightlife consisted to a few drinks in the bar/lounge at the motel after dinner, and then a brief discussion about the day’s events before it was slumber time again. Saturday would be our final day at this location and the plan was to expand our ride to maybe double the mileage with a stop to have dinner somewhere along the trail. The day began a bit better than the day before since there was very little fresh snow to contend with and we still had the blanket to pre-warm the sleds.

We headed out to the east again over much of the trail as the day before, our intended first stop was the town of Sainte Catherine ( the full name is much longer) then, after a brief warm up and fuel, we rode southwest to Saint Basile, had a quick lunch, then started back north to Saint Raymond. It was a beautiful day and the sun made it feel warmer than it actually was. We spent our last evening in the motel lounge again and discussed what our next destination would be. The original plan was to work our way back west toward home, so we settled on a snowmobile friendly community by the name of Grand Mere, was loaded up, and on the road at first light.

It should be noted that one can travel the full expanse of Canada by snow machine using their Trans-Canada Snowmobile trail system, but for our little group, we were content to just ride the local trails in and around Grand Mere, see some of the local attractions, and enjoy what we had crossed the border for, the abundant snows, the great trails, and because almost no one spoke anything but French, the feeling of being in a foreign country. We enjoyed just two days at this destination before having to head back home, not because we wanted to, but because our occupations demanded it.

As we approached the border to the United States, the Customs Officers were a bit more strict than when entering Canada, but with drivers licenses indicating we were, in fact, US Citizens, and after answering a few questions, we were back in the good old USA.

Reminiscing with the surviving members of our party these several years ago brought about the need to write this story, and to encourage other snowmobiling enthusiasts who may be tiring of riding the same local trails, to consider looking for a winter adventure either outside their own home state, or maybe even across the northern border. Many other states in the northern U S have snowmobile trails that rival our own, and plenty of outstanding scenery and attractions to be seen. Likewise, every province in Canada, including the far-north territories, are very inviting and hospitable to snowmobilers.

Michigan has the undisputable reputation for having a premier snowmobile trails system, but so do many of the other states. Canada has a rich history in the development and implementation of snow machine manufacture and the ability to travel from one destination to another through some of the most picturesque terrain in the planet. Whether it’s local, national, or international, every snowmobiling enthusiast should get out, ride, and make memories. I have, I plan to do more of it very soon, and maybe write another chapter or two.