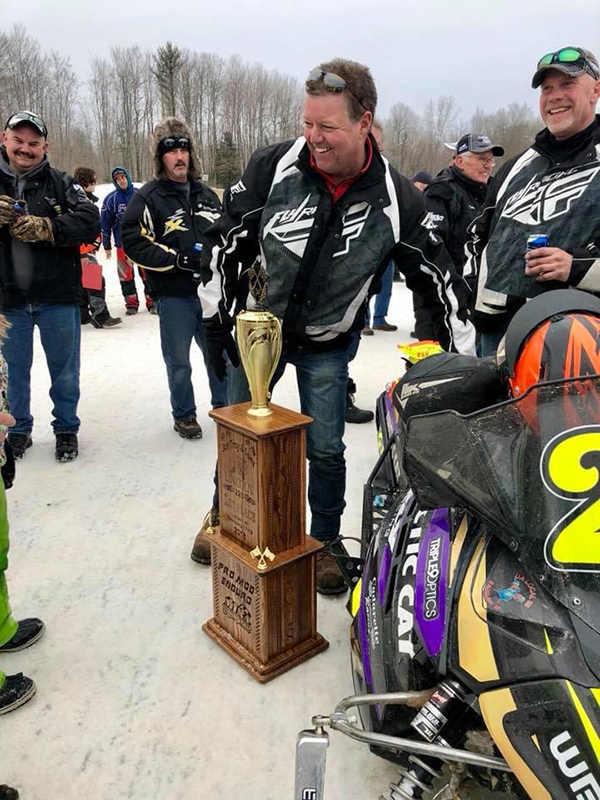 Who got you into snowmobiling and when; and what was their influence on you with regard to the sport?

Tim Leeck. We started entering local races in northern Michigan and that got us going. Tim pushed to start oval racing, and after our first one, it was evident he was a better racer and I was a better sled builder, but that worked!  His brother Danny filled in next and that was the beginning.

My proudest achievement has to be four I-500 wins – on three different brands. I’ve been blessed and lucky to have experienced multiple championships and wins with some really great teammates. Sweeping every race in 2019 was fantastic. 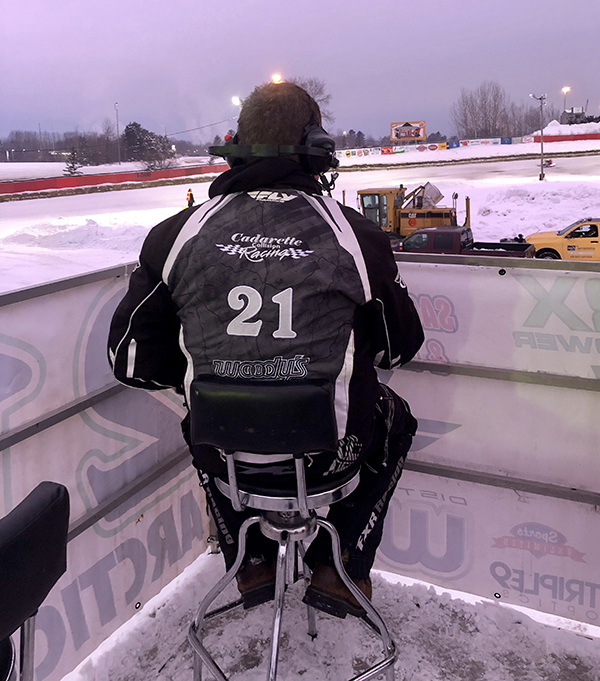 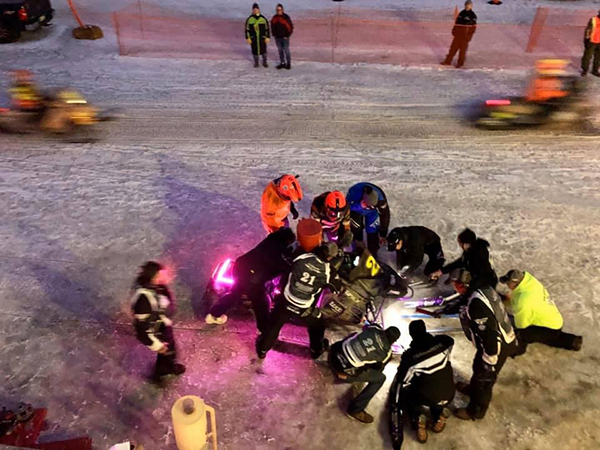 What is your career goal as an owner?

What were the driving factors to start the race team?

This is kind of a funny story and unexpected start to our team. In 1991, Tim and I were having a few drinks the night before the I-500 and on a whim, said “what the heck, let’s go try to qualify.” We were not expecting success, just to have a little fun. We pulled a sled together and were on our way. Tim ran it and low and behold … qualified! We didn’t race that year, but we went back the next year and have been racing ever since. I guess it was meant to be 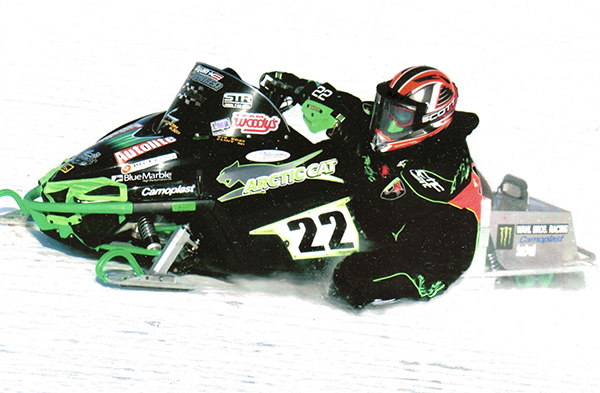 Who got you into snowmobiling and when; and what was their influence on you with regard to the sport?

My dad, Terry Spencer, got me into snowmobiling and racing. He bought me my first Kitty Cat when I was 3 years old in1978. I use to tear up the back yard with all the neighborhood kids, pulling them around on a sled, getting stuck all of the time. My dad started racing the year before I was born. He started in MISA races and USSA races around Michigan. When MIRA formed, he switched to enduro racing and never looked back.  My dad and his drivers, Rob Sass and Bill Britt were huge influences on me growing up. All I wanted to do was be like them.I would run that Kitty Cat around the yard pretending to be them.  Dad quit driving in 1984 when my mom got sick with cancer but kept Team Spencer going as the owner/head mechanic and ended up winning the MIRA Pro Enduro Championship that year.

I started racing my Kitty Cat at 8 years old at the old Gladwin County Ice Carnival in Albright Shores, MI. I outgrew that and couldn’t race again until I was 12 on an old Yamaha Enticer in Stock 3 class. The next year the age limit was raised to 14 so I had to sit out a year. I ran one race at 14 years old at Lincoln in the Formula 56 class on a 1981 Arctic Cat Sno Pro, where I crashed the sled and kinda scared myself. The next year at 15, I ran the whole MIRA series in the Formula 56 class and ended in a tie for the championship but ended 2nd on the tie breaker with my 1 win to the other guys 2 wins. For the next couple of years I ran the Outlaw class and Ameteur F3 until I turned Pro at age 18 in ‘93-’94 season. I’ve been going at it ever since.  There are a few accomplishments I’. proud of. My first win in Formula 56 at 15 years old racing against men with a ton more experience was huge for me.  I have a MIRA Champ 440 championship in 2004, and I won the last two Super Mod 440 titles, all riding for my dad. I was voted MIRA Pro Driver of the Year in 2004 and 2013. And  I’ve been a part of 4 MIRA Pro Mod Enduro Championships riding for Team 21 Cadarette Collision.  But probably my proudest achievement is winning the Soo I-500 in 2019 and sweeping the whole enduro season that year, and then following that up the next year sweeping the MIRA season for the 2nd year in a row, winning 9 races in a row and 13 of the last 16 overall.

What is your career goal?

My career goals have already been met. I accomplished way more than I ever expected. I’ve won races, won championships, and we’ve set some records along the way that are gonna be tough to beat. I guess my final career goal is to try and get one last Pro Enduro Championship and win a few more races along the way before I retire at the end of the year. My son Cameron started his racing career last season and I’m looking forward to watching him grow and learn and get better and we’ll see if it’s something he wants to stick with.

How did you become part of this racing team?

I started riding for the 21 Cadarette Collision team in 2012 after my old team, Walker Farms Racing 46, retired at the end of the 2011 season.  As soon as Greg heard they were done, he was on the phone with me trying to get me to ride for him.  It was a pretty easy decision.  For quite a few years most of the winning was done by 3 different teams, 21, 46, and 12. And with 21 switching to Arctic Cat, it made the decision that much easier for me.  I took a break from the team in 2014-15 to ride again for Walker 46 but when they retired for the final time I came back to 21 and it’s been an unbelievable ride! I’d like to thank my sponsors for my 22 ride: Arctic Cat, Woody’s, Castle Sales, Wahl Bros, Terry’s Custom Welding, Hooper Racing, Northern Crankshaft, Hazzard and Son Chassis, EKS Brand Goggles, LMB  Designs and Michigan Sled Chix. 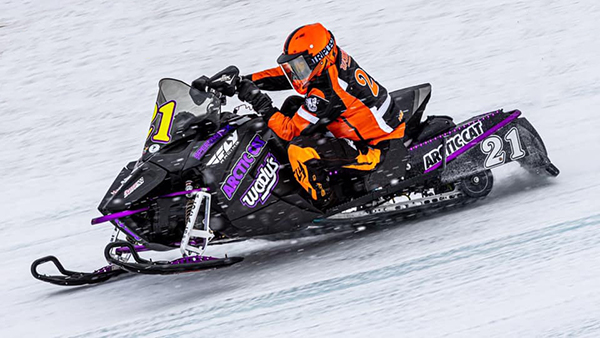 Who got you into snowmobiling and when?

What was their influence on you with regard to the sport? My parents had snowmobilies when I was very young. My oldest brothers Keith and Kevin raced before my time in some amateur gigs. Keith built a drag sled for our small-town festival and I was bit with the racing bug from that time on. I was only about 12 years old but I wanted to drive it so bad I could taste it. I didn’t start oval racing until I was about 25 years old with Ed Badour.

I ran with Ed Badour for about 1 year and then got started with the late Ken Manning in 1996. I raced on my own program for many years with Todd Krikke, Doug Flannery, and Brian Metzger. Hard to decide on a proudest moment, it’s a toss-up between 3 Soo I-500 wins, 12 MIRA Championships, or 7 Eagle River wins in 2007. All have earned a very special place in the memory book.

What is your career goal?

To retire healthy as a winner.

How did you become part of this racing team?

Greg Cadarette approached me after taking a year off, and asked me if I would like to come drive for him and be a part of his team. That turned out to be a great decision. We have been very successful in accomplishing several wins and championships.