Michelle Vallier Labadie, daughter of Charlie and Marilyn Vallier, who do the lion’s share of the work at the Top of the Lake Snowmobile Museum in Naubinway, had a really good idea. She had the idea of having a Kids Ride.

Her idea was to take a bunch of kids, let them ride their Kitty Cats, 120s and such and make a day of it. They would gather at the museum and then head out onto the trails for a short ride to the bridge over the Millecoquins River, about three miles away. They would spend most of the day riding. 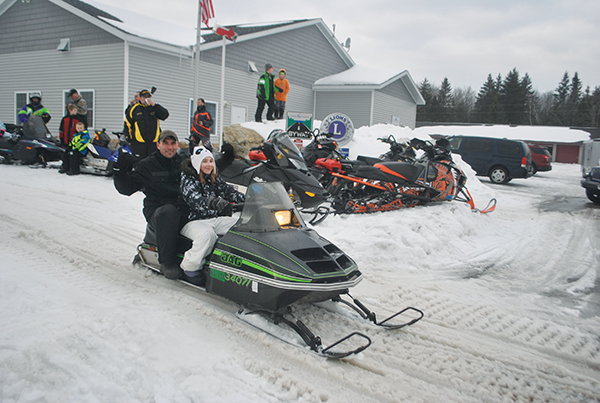 She also decided a bonfire would be good to give the kids a chance to warm up and socialize over hot dogs, hot chocolate and other snowmobiler-friendly food. Get them tuned into the snowmobiler lifestyle and off the couch, off the phone and out into the wild — all with plenty of adult supervision.

Michelle and her dad also had the idea to lead the kids on some short rides, a mile or so up, down and around, to give the kids quite a bit of seat time on their sleds with other kids.

And, it turned out great. I was able to ride along on the 2nd Kids Ride last winter. And, I can say for sure that the kids all had a really good time — and so did the adults. 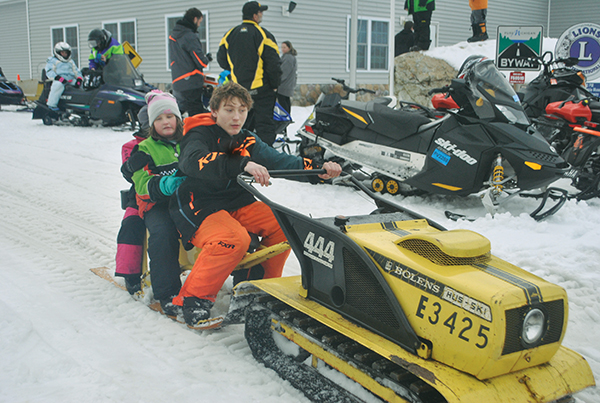 One of those kids I knew pretty well was Ava Kerridge, who was 10 at the time. She was there with Lance, her dad. She was on a little Polaris. Both were having an awesome time — one of those father/daughter bonding moments.

Then there was Owen Labadie, son of Michelle, who was 14 at the time and a bit older than most of the kids. However, he stepped up big time. The little ones looked to him as a role model and he took to the role perfectly. He answered all of their questions and gave them bits of advice. He was a perfect example of what a teenage kid should be like.

Although it was an organized ride, there were not too many rules. You wanted to ride, you showed up. If you had enough fun for the day, you took off and went home. It was all not that formal, but it was fun. Nobody left early. 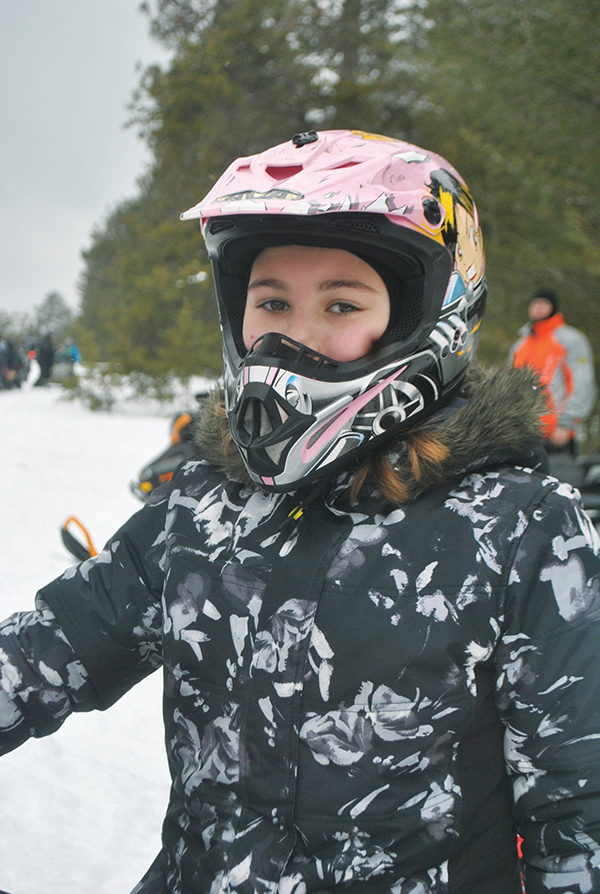 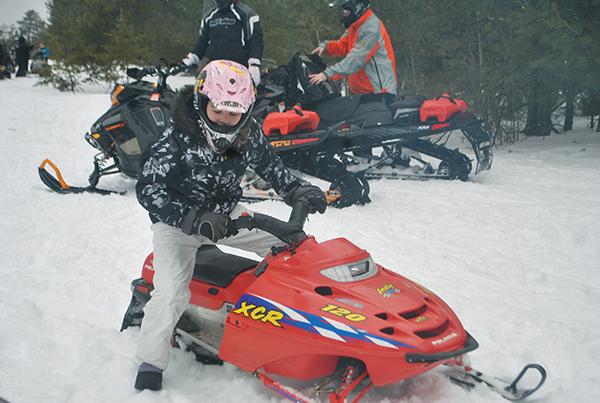 Just out of the blue, someone decided to make a little track at the site of the bonfire. The kids, with their favorite adults watching, put their little sleds through the paces. They even found a small bump so the little sleds could go “big air” on a smaller scale.

Me? I was sitting on a sled by the bonfire taking a few pics and just enjoying the day. I think I had as much fun as the kids or even their adults.

Then, one of my best moments was when little Owen Emrick came back to the fire for a bit of a rest and some hot cocoa. He pulls in just like a pro on his 120 right alongside me. He was more interested in things like not hitting me, finding his mom and the other goings on at the bonfire, and not exactly what was in front of him.

Like, there was a branch off a red pine hanging kind of low and he didn’t notice it soon enough. Totally surprised, he puts up his hands and totally forgot about that whole brake thing. And, you guessed it, that branch totally cleaned him off the sled. He ends up on his back, looking up at the sky. He was going pretty slow so he didn’t get hurt, but he gave himself, me and mom — who did the mom thing and came running immediately — a decent scare. 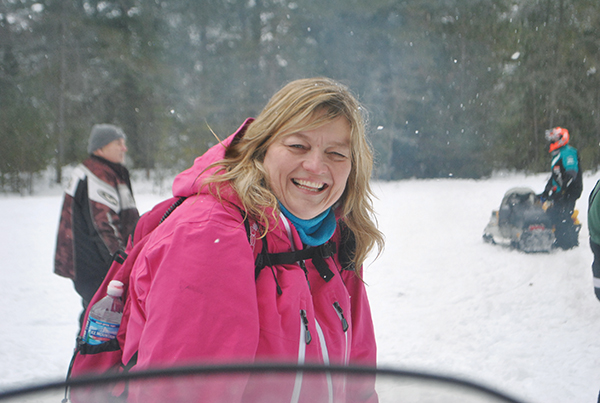 Then, he was getting his mandatory mom hug, just to be sure he was OK. He was kind of enjoying the hug. She did the once over to make sure he wasn’t broken. Then he kind of looks like, “Mom … Not in front of the guys.”

It was just fun. Now, I can remember getting knocked off a sled by a low-hanging branch, but I was a bit older and out by myself. When I was looking up at the sky, I did not have mom there to make sure I was OK, just some silly squirrel I am pretty sure was laughing at me. Made me a bit envious, but everything turned OK. Mom started breathing again and, in a few minutes, Owen had mounted back up and was ready to ride again.

As mentioned, the day was pretty casual. However, as the day ended, most of the riders chose to gather at the museum before they left. There, Marilyn Vallier was supervising some more snacks and kid-type treats. 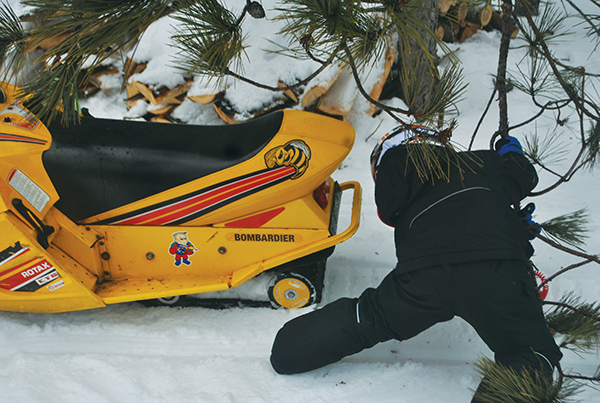 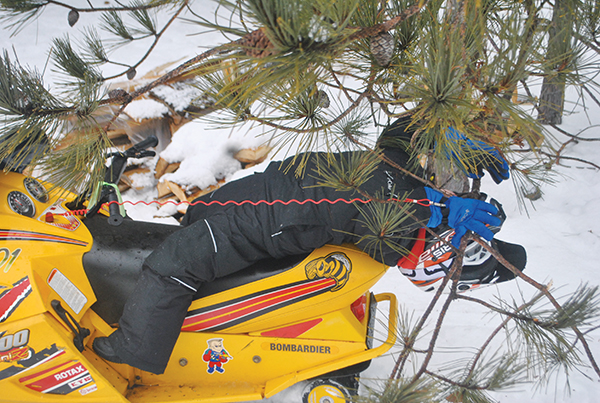 Then, Gary Shupack, head groomer driver from Curtis, showed up with the Curtis Chamber’s groomer. They are the sponsor that takes care of the trail through Naubinway. The kids were totally impressed, and Gary was totally cool with them. He gave them the 25-cent tour of the groomer.

Overall, this was a really fun day. The kids had a riot, as did their adults. So, this year, Michelle is planning more rides. Last year, she had planned on doing one a month in January, February and March. The first two went off really well; the third officially did not happen.

This year, with all the things that have been canceled, there was the obvious question as to whether the rides would be taking place this winter. On that, Michelle stated, “The ride is on!”

Snowmobiling is a social distancing kind of thing, meaning unless you are on a two-up, you don’t get all that close and cuddly with the other riders. And most riders are already wearing masks — the face masks we wear to keep warm. So, we got that covered as well. 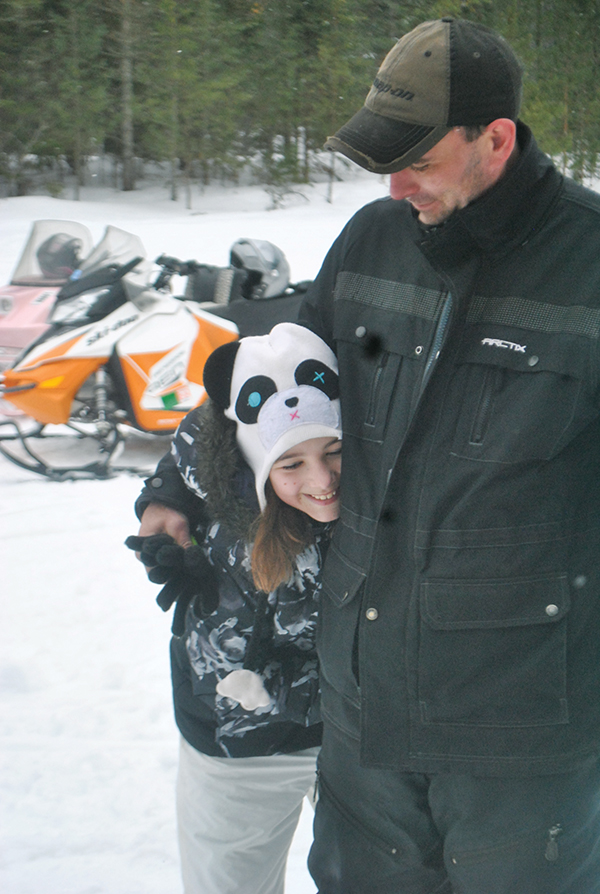 So, this coming winter, if you have kids and want a chance to spend a day with them and with some other kids, hanging out around a bonfire and having fun on sleds, this is the place to go.

Michelle is planning rides this year. However, weather is always a factor. Also, we are still not sure what political nonsense might come out of Lansing. But, regardless, if conditions are right, the rides will be happening.

“This year,” Michelle said, “the 1st Annual Randy Willford Memorial Kids Ride will take place on the first weekend of February on Feb. 6.”

Michelle also noted that last year, tragedy struck. Literally, the night before the second ride, Randy passed away. She wanted everyone to know that this ride was actually Randy’s idea. He just wanted to do some type of an event where he could take his grandkids out and ride with them. Michelle, who has a son, agreed. And, between the two of them, the Kids Ride was born. This event now lives on in his memory. 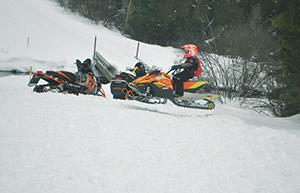 Michelle also wanted to mention that along with the museum, the event is also sponsored by the snowmobile group TNT Lady Sledders as well as Tots and Tracks, a splinter group from TNT. Education Outdoors, More Freaking Power, Motor City Sled Heads, Polaris, Klim, VO Gloves and Steven’s Sport Center are also sponsors. Michelle also wanted to thank Northern Retreat, a local motel and, of course, her dad and mom (Charlie and Marilyn) at the museum, along with the rest of the people there.

The Feb. 6 ride is scheduled to start about 11 a.m., with a bit of lunch at the museum and a short talk about snowmobile safety and a brief tour of the museum. Then everyone will head out onto the trails for about 3-4 hours and come back to the museum for a few more snacks and a bit of that snowmobiler socializing we are famous for.

The cost is $10, including lunch and other snacks. However, Mac’s Red Owl in Newberry has come on as a sponsor and will be providing lunch. (If you happen to be in the Newberry area and need groceries or lunch, they have an awesome deli. Remember this: They support us. We should support them. Also, from personal experience: My dog just loves the fried chicken from their deli.) Therefore, there will be no charge. Also, the museum also does not charge any entry fee for participants. But, as always, donations are always welcome but not expected in this case. •

For more information, contact the Top of the Lake Snowmobile Museum at info@snowmobilemuseum.com or call (906) 477-6298.