Every year for the past five-plus decades, snowmobilers and snowmobile program administrators from across the nation and around the world have joined together at a select location in early June to discuss issues of mutual concern that may have a possible international impact on snowmobiling activities and other winter recreational endeavors.

The International Snowmobile Congress is a conglomerate of several snowmobile-related entities including local clubs, state and provincial associations, and national organizations. Also included are international manufacturers, media, tourism representative and the three regional chapters as well as the already-mentioned administrators. A representative from each comes to the international table as a delegate of the International Snowmobile Council. It’s not all about business meetings; there are plenty of fun activities laced into the itinerary to make the entire experience enjoyable and entertaining.

The first International Snowmobile Congress was held in Albany, N.Y. in 1968, with an unofficial count of just more than 600 participants, almost equally split between 26 states and nine Canadian provinces. Throughout the following years, the attendance has decreased somewhat while the number of states and provinces has increased slightly, and other countries such as Sweden, Russia and Norway have applied for membership. The global economic status plays a big part in which countries and states annually participate.

In the early years, the United States didn’t have a national organization like the Canadian provinces did. When the Congress was to be held in the States, it was the International Snowmobile Industry Association under which all state associations were grouped. In Canada, however, the Canadian Council of Snowmobile Organizations was in existence long before the first Congress was agreed to.

It was in 1995 that 27 states in attendance at the 27th International Snowmobile Congress in Cedar Rapids, Iowa, appointed a steering committee to research and recommend the establishment of a national snowmobile organization, complete with a mission statement, bylaws and a charter. At that Congress, the American Council of Snowmobile Associations was born. 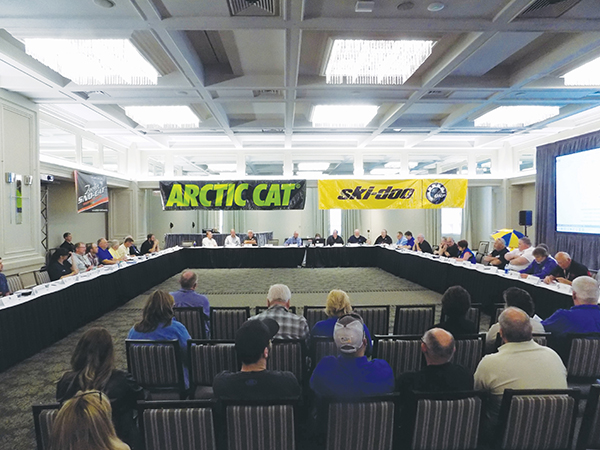 During the past 53 years, Michigan has hosted just three such events, the first being a shared Congress in 1973 between Sault Ste. Marie and its sister city, Ontario, Canada. The Michigan Snowmobile Association again was host in 1998 at the Shanty Creek Resort in Bellaire, and the third time was in 2019 at the Amway Grand Hotel in Grand Rapids.

Of the 53 annual events, only once has it been canceled, and that was in 2020, due to the coronavirus pandemic. The host of the 52nd International Snowmobile Congress would have been the Saskatchewan Snowmobile Association in the Canadian city of Regina. Cancellation of the event was a tough decision to make; but it was necessary for the overall health and welfare of all concerned. As it turned out, the borders between the U.S. and Canada were closed in late March, which would have prevented travel anyway.

As we look for better days ahead, plans for the 53rd Congress are under way and will be held June 9-12, 2021 in Omaha, Neb., with the Nebraska State Snowmobile Association as host. It will be held at the Hilton Omaha Hotel and Conference Center in the heart of the city’s Old Market Entertainment District.

For those arriving early, the host association has planned a motorcycle ride through Loess Hills on June 8. Not sure about the availability of rentals but those riding their own wheels can be assured of a fun-filled day. Some of the other activities begin on the first (unofficial) day of the Congress with the Friends of Snowmobiling fundraising event during the afternoon of June 9, always a day filled with fun, games and plenty of libations to quench the thirst as the activities unfold. The host association goes all out with their welcome reception to round out the evening.

On Thursday morning, June 10, a full day of interesting activities will begin early with breakfast and the opening ceremonies with the positioning of flags on the podium, followed by a keynote speaker and the rest of the morning program. Then, after a short break, the next couple of hours will be dedicated to chapter meetings. After a brief break for lunch, the national association meetings, as well as those of the media, tourism and administrators, will take place. The evening will be filled with lots of fun as attendees are treated to an offsite trip and a night at the zoo. 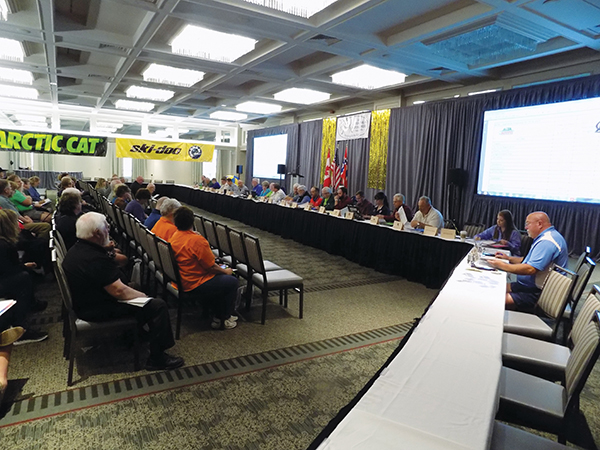 On Friday, June 11, participants will begin with breakfast and a motivational speaker, more meetings with interesting issues, and breakout sessions highlighting safety and other educational topics. The evening’s fun stuff begins in late afternoon with the groomer reception, complete with lots of fun and games and, of course, more adult libations. The Iron Dog Brigade, “an honorary society dedicated to the fun of snowmobiling,” usually holds its formal dinner this evening to induct new pups into their closed group.

The final day of the Congress, June 12, will be filled with lots of interesting activities. The meetings today will normally be brief, as the national organizations finish with any outstanding deliberations and hold their annual election of officers. After the lunch break, the International Snowmobile Council holds its one meeting, which is basically a wrap-up and summary of all association and group activities for the past few days. The evening will feature a banquet and awards ceremony recognizing those selected as snowmobiling family, youth snowmobiler, individual snowmobiler, groomer, club and dealership of the year for outstanding performance from each of the countries represented.

Closing out the evening — and usually into the early morning hours — will be the Thirsty Dogs reception where the new pups are initiated and there’s tons of fun. This is a purely charitable organization boasting more than 6,000 members and raising thousands of dollars over the years through their memberships and donations.

So, there you have the plans for snowmobilers from around the world to get together for a series of serious talks, some discussion on what projects have worked and what hasn’t and, of course, plenty of fun activities.

Why attend an International Snowmobile Congress? Snowmobiling is a very popular winter recreation of choice and a major economic contributor in every Snow Belt state across the nation, in every province of Canada,as well as Russia and Scandinavia. A conservative estimate indicates snowmobiling now provides more than $30 billion in economic stimulus in North America alone. Snowmobilers can be proud of their part in such an awesome accomplishment.

But snowmobiling is not without challenges. Organized programs and activities such as those at the International Snowmobile Congress provide the best answers and solutions to protect and preserve our favorite wintertime recreation. It is this very event that’s dedicated to developing long-range goals and worldwide strategies that can, and will, guarantee access to public lands in future years.
Why not consider attending the 2021 International Snowmobile Congress next June in Omaha? It can be a fun-filled weekend and an eye-opening event with plenty of information and interesting topics most folks have never considered. For more information, email isc2021ne@gmail.com, call Jeff Kracl at (402) 750-2338 or go to www.snowmobilers.org/isc/.