This year will mark the 29th year for the Antique and Vintage Snowmobile Show in Naubinway, as it was called way back when. I know this for a fact, because I was there when it was born.

At that time, I was on the Naubinway/Engadine Merchants Association, the forerunner of the Top of the Lake Communities Association. We were the group that hosted events and such. Way back then, in the early fall, a couple of guys, Charlie Vallier and Tom King, approached our group with an idea to do an antique and vintage snowmobile show.

I can remember that the group, myself included, did kind of a “you want to do a what?” We had never heard of such a thing. But Charlie and Tom explained that collecting old snowmobiles was a growing hobby and wanted to give it a try.

I can then remember our next question: “How much will it cost us?” I don’t remember their answer, but it was well within reason, and we gave it our blessing.

That first show was a limited success. But, enough of a success that we wanted to make it an annual event. A few years later, and it had grown. Many more collectors were displaying their sleds, with hundreds, if not thousands of people showing up.

I can remember at one show, trying to get some idea of how many people were there. All we came up with was “a lot.” You see, they were coming in cars and in sleds. I think a few might have even parachuted in. And, with no actual admission fee, we had no way to track numbers. For a while, we were getting really close to the 300-sled mark. 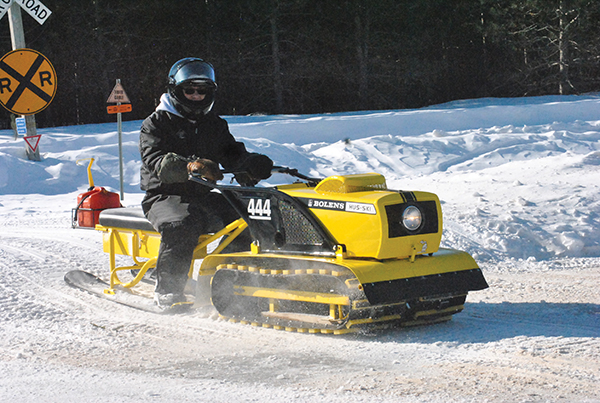 Also, we added a ride. At first, it went to a local eatery, but after only a year or two, we outgrew that. We moved to the Town Hall and that was fine. But, to change things up and keep the show fresh, we moved the breakfast to the Pavilion in Naubinway (its version of a town hall.) We moved the ride to a lake about 10 miles north of town where there is a cabin, a place for a cookout, and just a pretty place to ride to and hang out.

In later years, we have also added a few other things. For those first few shows, Friday night was kind of a social thing. After the Breakfast Ride, everyone would kind of stay out and ride at their own pace. We would end up at the motel in town, which Tom owned, and have a somewhat private party. Not really private. Not really advertised. A free fish fry. Naubinway is a commercial fishing town. We had fish.

But, a couple years back, some of the people wanted to do something different. So, now on Friday night at about dark, they do a parade around town and then head out about 3 miles to a bridge over a local river. There, they have a bonfire and a lot of good conversation about old sleds.

A few years ago, the show added another ride. This one is kind of an invite-only thing for the rear-engine sleds that move at about 5 or 6 mph. They go from Naubinway to Curtis, then to Newberry, then back to Naubinway. On a new sled, this is a cool afternoon loop. On the old rear-engine sled, a three-day ride. Three legs. Three days. About 20 miles a leg. 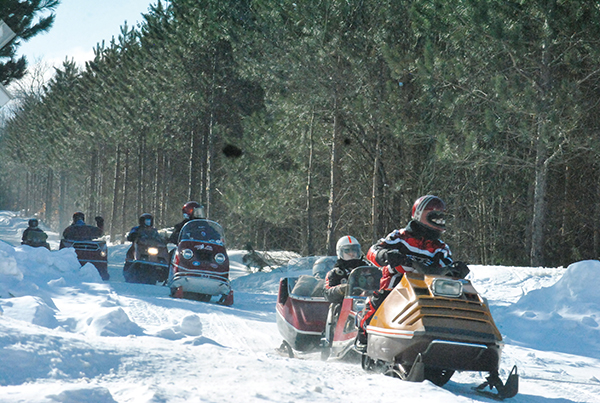 After 28 years, this show is still one of the best in the state. And, being one of the first, it has that kind of prestige thing. Bragging rights. And it is still a whole lot of fun.

With all of that COVID stuff and the Governor trying to keep us locked up and “safe,” nobody is sure exactly what will happen.

But I talked to Charlie, and he said, “At the moment, we are on. The show and the ride will be OK. Not sure about the dinner. That is usually at the Town Hall. And, we are not sure about how that will work.

“Like everyone else, we will just have to see what happens. But, most of the show is outside. And, snowmobiling is very much a ‘social distancing’ type of sport. Also, while we will be taking all the precautions that we can, if you do not feel safe, then stay home. But, if we can do it, we will be having the show and ride. And, if you want, come on out and have some fun with us.”

He continued, “This year, our Feature Sled is the John Deere. And, we will actually be raffling off one of these. Also, this is a fun event. We do not have a whole lot of prizes or trophies. We tried that and it didn’t work. Now, we just have a few prizes and we just try to have fun.

“The best thing that I can say right now is that the show is still on. As to what we will be doing, keep checking in with the museum. We will be posting updates online and on our Facebook page. But, right now, I want to again invite everyone to the 29th Top of the Lake Snowmobile Museum’s Snowmobile Show and Ride.”

Reach the museum via email at info@snowmobilemuseum.com or call during normal business hours at (906) 477-6298.