With the old temporary bridge removed and a new permanent bridge installed in late November over the north branch of Stutt’s Creek in the northwestern area of the Hiawatha National Forest’s west zone (and the cosmetic cleanup completed shortly afterwards), Hiawatha NF Supervisor Cid Morgan declared the Doty Trestle Bridge project completed and Trail #8 reopened for recreational use. The announcement, a joint decision by DNR and NFS key players, was made Dec. 4.

Promptly at noon on Dec. 12, Alger County SORVA, grant sponsor for the Munising area trails, held the official trail opening, complete with a ribbon-cutting ceremony and the first trail groomer crossing of the new bridge. Just a few days prior, SORVA President Keith Churill said it was his privilege and pleasure to invite me to do the cutting as a principal operative in the entire process from start to finish.

So, on a cloudy and cold Saturday, several SORVA members and guests gathered at the bridge, took a few photos and discussed the drawn-out process of nearly 20 years in getting a replacement for the old original structure. Then, with an oversized pair of scissors and everyone looking on, I made the official cut.

In an earlier statement from the HNF supervisor, she said completion of the bridge marks the largest project the Hiawatha National Forest and the Michigan Department of Natural Resources have worked on together, with assistance from the Michigan Department of Transportation. “This project is a great example of how multiple agencies and private companies can collaborate successfully on a project,” Supervisor Morgan said. 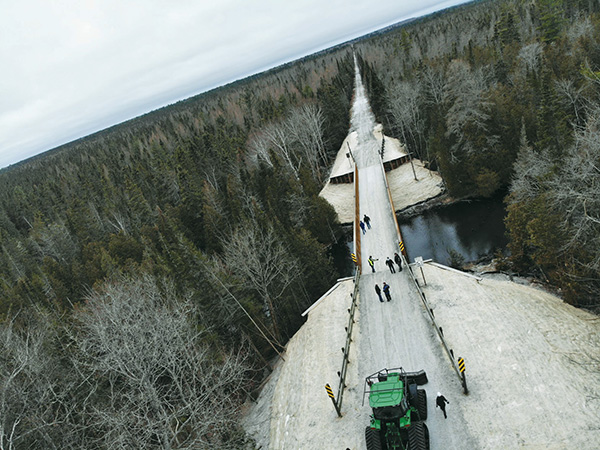 Trail #8 is the major east-west corridor on the northern side of the Upper Peninsula, beginning in Sault Sainte Marie and terminating in Ironwood at the Michigan/Wisconsin border. Without the Doty bridge, that corridor would not be complete. DNR Trail Specialist for the eastern U.P., Paul Gaberdiel, said, “The bridge serves as a major link for snowmobile and off-road vehicle trails between many communities, providing a huge economic impact.” Funding for this project came from multiple sources, but the lion’s share was provided by the Federal Highway Administration’s Recreational Trails Program, which is derived from gas-tax revenue.

In discussions with several businesses across the central upper peninsula, many have stated that without the revenue snowmobilers bring they would be unable to survive the (sometimes) harsh winter seasons. Talking with snowmobilers and off-road enthusiasts alike, they all agree that without the bridge they would be unable to access the several necessities such as food, fuel and lodging.

The Alger County Snowmobile and ORV Association maintains both snowmobile Trail #8 and ORV Trail C on a year-round basis, and from Dec. 1 through March 31 grooms Trail #8 on a 24-hour, 7-day-per-week schedule when there has been sufficient snowfall to permit it. With the new permanent bridge now firmly set and snow now falling, snowmobilers will have a great location for some spectacular photo ops. Yes, it was a long time coming — and may not have ever come to completion were it not for the great partnerships between all the agencies, the snowmobile associations and the many volunteers that kept the project on the action lists. Congratulations to all involved in this project.