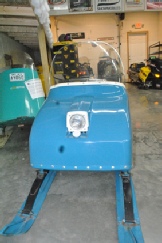 Hey guys, I’ve had a theme going the last couple of months. That is, I just passed a personal milestone. It’s been 25 years now that I have been writing for this fine publication. And I have been taking you readers down some memory trails with me. So on this last Vintage Sled of the Month for this year, I am going to keep that same idea going.

This is not a story about my first sled – that was a 1967 Sno Jet. I would have liked to have done a story on that one, but here at the Top of the Lake Snowmobile Museum in Naubinway, they didn’t have one. But they do have a 1966 Sno-Jet, so I am going with that one – my Vintage Sled of the Month is the 1966 Sno-Jet.

But, first, my sled. I was 9. It was Christmas, and in my Christmas stocking, there was this little present. When I opened it, there was a key in it. As soon as I saw it, I knew it was a key to a snowmobile, because it had the local snowmobile dealership’s logo on the chain. I was literally coming off the ground, I was so happy. Then, for the rest of that winter, and for many winters to follow, around and around in the field behind my house I went. That little key began a life long love of snowmobiling and motor sports.

The sled in the Museum has a couple of really cool stories. First, it belongs to Museum founder and curator Charlie Vallier. He told me that he bought it at a local auction many years ago. Stayed there all day, waiting for it to come up. Then, finally got it for the whopping price of $5. Since then, he had to totally restore it to just about original showroom quality. And I’m pretty sure if he ever wanted to sell it, he would get a whole lot more than $5 for it.