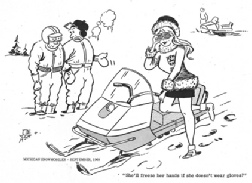 Every month for the past 22 years we have put together a story about the corresponding issues of 30 years ago. Sorry to say but we do not have the February 1990 issue in our archives. We must have over 1,000 magazines in our office, but no February 1990. We also have every season bound in a hard cover book but we have no 1989-90 season. I guess after 53 years its not so bad if your only missing one issue. So here is a little history about this article.

We started doing these stories in September, 1997, and (Northwinds Charlie) Slater was the first to write this article. The story he wrote was on our very first issue from October 1967.